Call of Duty Wiki
Register
Don't have an account?
Sign In
Advertisement
in: Call of Duty: Black Ops II Attachments

"Detects lingering heat signatures from stationary enemies through materials at up to 25 meters."
— Create-A-Class description.

The Millimeter Scanner, or MMS, is an attachment featured in Call of Duty: Black Ops II. When a player aims down the MMS, it pulsates every two-three seconds, revealing enemies behind cover or concealed by smoke or Optical Camouflage within 25 meters provided they are stationary or are moving at speeds similar to aiming down sights with an LMG while crouched. Aiming with the MMS zooms in even less than plain Iron Sights, allowing for better peripheral vision with the cost of less long-range effectiveness. As such, the MMS is recommended for close quarters-type weapons. The MMS does not have a customizable reticle. In the mode Gun Game, the MMS is attached to the M27 at gun level 9. The MMS is available for Zombies, and is identical to the multiplayer counterpart, except that it can scan moving targets. This makes it incredibly useful in Green Run, where the thick fog makes it nearly impossible to see zombies at any significant distance away.

Players cannot equip both the Millimeter Scanner and FMJ simultaneously, most likely for balancing purposes. Although the MMS cannot be paired with FMJ, it can be equipped on the SWAT-556 and SMR assault rifles which have the same level of penetration as Light Machine Guns. Another viable weapon for the MMS is the KSG shotgun which has very high penetration, including the ability to one-shot kill through walls. Even without aiming, the MMS will continue to scan the area and spot enemies, but only within a small area, inside the scope. As the Millimeter Scanner is placed some how higher, the amount of visual muzzle flash is decreased, but not as much as the EOTech Sight. It is almost as clear as the reflex sight but (still) it should be used for Submachine Guns.

Enemy players with Cold-Blooded as one of their perks will not have their character outlined through the pulse, canceling the effects of the MMS.

When disabled by EMP Grenades or the EMP Systems Scorestreak, the MMS, like other optical attachments, will not function unless the player has Hard Wired as one of their perks.

This attachment is rarely seen in multiplayer, most likely because it is the last weapon attachment to be unlocked at which point many players prestige their weapon, or move on to leveling up another.

Looking through the MMS on the SWAT-556 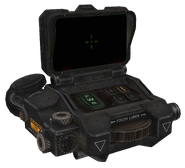 Render of the MMS.