For the Call of Duty 3 character, see Nowak.

Hermann Freisinger with a chair

Klauser, Sten, Top Break, any weapon obtained by the player

Milos Novak (Czech: Miloš Novák) is a character featured in Call of Duty: Vanguard, and its tie-in comic series. He is the protagonist and playable character in the mission Phoenix.

Following the invasion and subsequent occupation of Yugoslavia, Milos Novak joined Tito's National Liberation Army of partisans where he grew to become one of its most effective undercover agents. In 1944, under the name "Jan Zima", Novak infiltrated the Wehrmacht local forces in Novi Sad, Serbia where he was approached by Carver Butcher. After giving him a secret code phrase, Butcher gave Novak new orders: to travel to Hamburg in Nazi Germany and steal something about Phoenix.

In April 1945, Novak and the rest of the Task Force Vanguard were deployed on their first mission in Hamburg, Germany. Their task was to search and secure any and all intel regarding Project Phoenix using Novak's safecracking skills, but soon he was caught alongside with his team by Nazis. When Arthur Kingsley challenged Hermann Freisinger to kill him, he responded by targeting Novak instead, bludgeoning him to death with a chair.

Novak as a partisan. 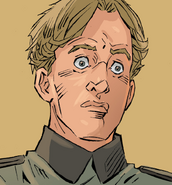