Stack Up at the Warehouse
Clear the Warehouse
Assault into the Docks
Open Truck Door
Chase Hostiles
Get to the truck!
Stop the subway train
Clear Westminster Station
Setup Blockade

"Mind the Gap" is the seventh mission of Call of Duty: Modern Warfare 3, and the penultimate mission of Act 1 (the last if the player decides to skip "Davis Family Vacation"). The player takes control of Marcus Burns, an SAS Commando in London. It involves an SAS team tracking down Inner Circle's classified chemicals.

At a warehouse in Canary Wharf, a group of terrorists load classified cargo into a fleet of moving vans. Unknown to them, a UAV circles the area, performing surveillance as several SAS teams begin to converge on the scene. Marcus Burns, Wallcroft and Griffen jump a fence and sneak into the alleyways behind the warehouse. Along the way, the team catches a few of the terrorists off guard. Marcus is then instructed to kill them without alerting any other hostiles.

After securing the warehouse, all pretense of stealth vanishes and Wallcroft orders the team to engage the terrorists directly. The team exits the warehouse and fights its way to a nearby dock. Vulture Two-Two arrives and assists the player at this point. Once the area is clear Wallcroft orders Burns to open the doors of a van, only to find nothing.

After some more fighting, the surviving terrorists fall back to an underground tube tunnel, where they board and hijack a tube train. Wallcroft, Burns, and Griffen chase after them through the tube on a pair of pickup trucks. Before the train driver can be shot, the SAS commando is shot and killed and the truck crashes into the train, derailing it. The trio dodge the train until their truck flips, killing Griffen.

Some time later, Burns slips in and out of consciousness, seeing the aftermath of the train crash. Wallcroft walks from the flaming wreckage and checks on Burns and finds him in stable condition; the two of them inspect the underground train for survivors. As they reach the Westminster station platform, both come under heavy fire from the surviving terrorists, forcing them to fight their way up to the streets of London just a few feet from the Palace of Westminster itself.

Upon reaching street level and joining up with police and another SAS team, the teams block a road where they open fire on what they think is a terrorist truck containing the chemicals. The truck flips over, but it turns out to be another decoy. Wallcroft tries to get Baseplate on the line in order to find the whereabouts of the other trucks, but gets nothing.

If the player skipped the disturbing content at the beginning of the level, the camera will not cut to Davis Family Vacation, instead the truck will simply explode, killing everyone around it and blowing Burns away.

If the player decided not to skip the disturbing content at the beginning of the level, the camera will then cut to the aforementioned mission, where the Davis family are filming their trip to Big Ben. As the camera rolls, the actual truck containing the chemicals stops, and the two people in the truck, presumably Inner Circle members run away from it. Moments later, the truck explodes, releasing the chemicals and killing the Davis family. The camera is still filming as it happens. Note that this mission has no effect on gameplay and is mainly cinematic. 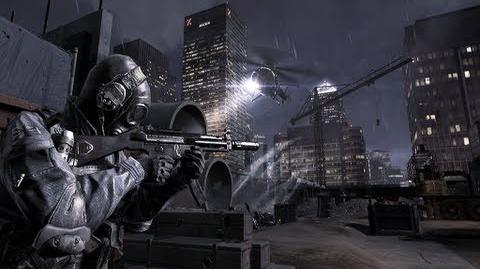 Wallcroft, in the aftermath of the train crash.

Wallcroft in "Mind the Gap".

SAS soldiers shooting at the truck in the Reveal trailer, note that the sky is a bit darker compared to the actual game.

17. Enter the building across from the locked door, turn left, and look for the intel on a crate.

18. Before (or after) opening the truck doors, run to the building to the northeast. The player will find stairs leading up to a catwalk. Follow this path until the player can enter the building and check the desk for some intel.

19. As soon as the player gets to the top of the first escalator, look for a newsstand in front of the player. The intel is on the ground behind the counter. 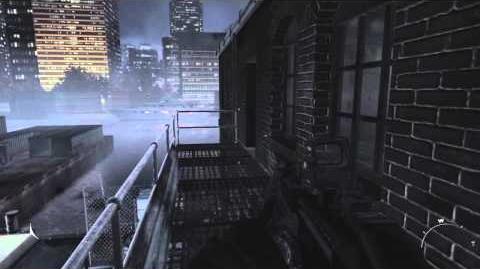