For another variant, see Death Machine.

"This is it! Spin 'em up!"
— Unknown Ranger in Team Player

In Call of Duty 4, the Minigun is used by Soap in "Heat" to provide supporting fire for his retreating SAS allies. The Minigun is attached to a downed helicopter (the same helicopter can be seen in the same position in "Safehouse", however one cannot use it due to a patch of fire blocking entry to the helicopter) just past the church. It can also be found in "F.N.G.", but the player will not be allowed to use it, since it will just be laying in the weapon's cabinet.

The Minigun can really do a lot of damage because of its high firing rate, but it needs to be cooled off or it will overheat. However, keeping it spooled will not overheat the gun. It's also worth noting that the minigun is highly effective against the helicopters in the mission "Heat", it can normally down one in a short burst and will stop the troops getting off and engaging the player later on in the mission. On Arcade Mode, a helicopter kill is worth 1000 points. A quick spray around will down them all very quickly.

The Minigun lying next to a cabinet in F.N.G..
Add a photo to this gallery

The Minigun is constantly used throughout the helicopter levels in the game, where the player usually needs it to eliminate opposition or take out objectives. Unlike its console counterparts, it cannot overheat and does not need to be spooled up before firing, making it an extremely effective weapon. However, it does lack power and is somewhat inaccurate.

The Minigun returns in Modern Warfare 2. It is featured far more often than in Call of Duty 4 and also now has a much shorter and more realistic spooling time. It can be seen in the single player mission "Team Player" mounted on a Humvee. It is also seen on various helicopters. The new Sentry Gun, available in the campaign, Special Ops and Multiplayer, also uses the M134. Additionally, in the mission "The Enemy of My Enemy", it is seen mounted to black SUVs used by Shadow Company.

The HMMWV-mounted M134 is far more inaccurate than the other implementations, firing in a wide, but consistent circular spread; the miniguns mounted on helicopters fire with a much tighter spread.

In Multiplayer, the minigun appears in the multiplayer maps Skidrow, Wasteland, Karachi, Rundown, and Overgrown, replacing the M249 SAW as the standard stationary gun due to balancing issues, due to players in Call of Duty 4 constantly going prone, shooting off a burst, then going prone again automatically due to the way the game handles it. Now, players have to expose themselves for the short spool time before being able to shoot, however the minigun has a higher rate of fire to make up for this. It can be devastating at controlling choke points but the gunner is very exposed and will be a target for enemy snipers.

Using the aim function zooms in and spools the gun barrels without firing, eliminating the "warm up" time. The word "GAU 4" can be seen on the top.

The Multiplayer version of the Minigun in first-person

Zooming in and spooling the Minigun

The Minigun in third-person
Add a photo to this gallery

The minigun reappears in Modern Warfare: Mobilized as a usable support weapon. Like in the previous Nintendo DS game set in the Modern Warfare era, it can only be used in helicopter levels. Unfortunately, the only helicopter level is "Helicopter Insertion", so its use is limited. It is now much more powerful, though not as powerful as on the consoles and PC. Luckily, its accuracy has been increased by a large amount, allowing nearly all of the bullets to focus on the designated target, compensating for its low damage (for a minigun).

The minigun appears in Force Recon as a support weapon used by the player. Like in NDS installments, it is only used in helicopter based missions.

The player using the minigun
Add a photo to this gallery

The Minigun returns in Black Ops, and is used as one of the helicopter's weapons in "Redemption". The minigun is also used in the Chopper Gunner. The minigun is not able to be used directly as a stationary platform, but can be used when mobile by use of the Death Machine. The Death Machine is available in the mission Vorkuta.

Using the helicopter's minigun in "Redemption".

Using the minigun while in a Chopper Gunner.

Third person view of the minigun in the Chopper Gunner.
Add a photo to this gallery

The M134 returns in Call of Duty: Modern Warfare 3.

In the end of the mission "Black Tuesday", a M134 is mounted on a UH-60 Blackhawk and was manned by Frost to defend the helicopter from three enemy Mi-24 Hinds. Frost later uses one mounted on Rhino 2 in "Goalpost", after Rhino 2's gunner is killed.

In the multiplayer map Bakaara, there is a mounted minigun on the crashed UH-60 Blackhawk located near the port area. Miniguns are also seen scattered throughout Liberation.

The minigun is featured in the mission "Iron Clad" mounted on "Pit Boss". It is used by the player who controls the tank in Co-op.

Shooting at a Hind helicopter.

Frost mans the minigun on an M1A2 Abrams tank.

A U.S.M.C Soldier using minigun on an M1A2 Abrams tank.

Minigun mounted on the Technical

Minigun mounted on Abrams
Add a photo to this gallery

Third Person View
Add a photo to this gallery

The Minigun appears in Black Ops II in campaign where it can be unlocked after completing five challenges in "Judgment Day" along with the Death Machine. It is the Black Ops Death Machine model, and works in precisely the same way. Indeed, unlike the new Death Machine in Black Ops II, the player still cannot sprint with the Minigun, nor does it gain a zoom when the aim button is pressed.

During "Achilles' Veil", if the player chooses to have Farid attack Menendez, there will be a brief interlude where Section uses a minigun mounted on a US VTOL; this is the Black Ops Chopper Gunner minigun model without the belt box. The same model of mounted minigun can also be used from a VTOL in the Strike Force mission "Second Chance".

The Minigun in first person.

Using the Minigun on horseback one-handed, in "Old Wounds". Note that the lower part of the grip is missing from the weapon model.

The mounted version in "Achilles' Veil".

Unused pick-up icon. The weapon in-game reuses the one of the first Black Ops' Death Machine instead.
Add a photo to this gallery

The Minigun is available in both mounted and portable forms. The mounted one is found in multiplayer as in Modern Warfare 2 in the maps Overgrown and Ambush. The portable version is only available in Infected mode, as well as in Cyborg Evacuation, Death March, and Zombie Survival. The portable Minigun in Cyborg Evacuation can be obtained by killing the Roarer, while the mounted one is used in the evacuation chopper at the end.

The Minigun in first person 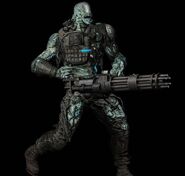 The Minigun in the hands of the Roarer

The mounted Minigun
Add a photo to this gallery

The portable version of the minigun is not available in the campaign, but the mounted one is used by Logan on a jeep in the mission Clockwork, and in a UH-60 Blackhawk in the mission Severed Ties.

The minigun is obtainable by way of ammo crate for normal soldiers and it can be picked up and used after that. It is also the primary weapon for the Juggernaut Pointstreak. It does not need to be spooled up before firing, unlike the mounted variant (and the Death Machine from the previous games).

The player can sprint while holding the Minigun, but they cannot go prone nor slide with it equipped, and jumping stops them from sprinting (like with all weapons in previous games), though climbing still allows them to.

A frustrating fact about the Minigun is its swap time: even though it is brought moderately fast, there is a significant delay before the player can actually fire this weapon after selecting it. This can be remedied by using the perk Reflex.

The minigun appears in Extinction, in both mounted and portable forms. In the map Mayday, there are six remote controlled miniguns located on the top deck, 2 outside the bridge and 4 in the final area. which switch to the camera view of each minigun, but otherwise they remain functionally the same as normal mounted variants. The portable version appears as the Death Machine under the Equalizer category. After getting the 3rd upgrade its name will change whilst equipped to "Death Incinerator".

The Minigun in first person

The Minigun being drawn in the Juggernaut pointstreak

The Minigun in third person

On the map "Bio Lab" there is a usable mounted minigun on the side of the building that is carried down to the map. On the map "Atlas Gorge", there is a minigun near the Atlas spawn. There are two miniguns on the map "Kremlin", one in a palace and one in a building; both are in the windows of the second floor of the buildings overlooking the bridge connecting the two structures. The palace's minigun is on the right window and the other is on the left window of the other building. There are also multiple red minigun models scattered around the map Chop Shop near point C in the gamemode Domination.

Minigun in the map Bio Lab

Minigun in the map Atlas Gorge

Minigun in palace in the map Kremlin

Minigun in other building in the map Kremlin

The Minigun appears in Call of Duty: Modern Warfare in a portable form.

Dropped from all Juggernaut kills in multiplayer or spec ops

Retrieved from "https://callofduty.fandom.com/wiki/Minigun?oldid=2491542"
Community content is available under CC-BY-SA unless otherwise noted.