The Missile Strike is a reward obtained in the field order's Care Package on the map Siege. When called in, a small volley of missiles will fire from the edge of the map and strike, killing enemies that are outside buildings/cover. 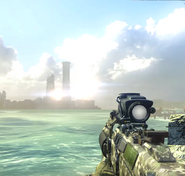 Missiles being launched from an island afar.

The Missile Strike is a Scorestreak in Call of Duty: Advanced Warfare.

The Missile Strike appears in mutliplayer mode. It costs 650 points to call in. Once called in, the player will control a missile that can boost. It's nearly identical to the Predator Missile from the Modern Warfare series.

Adding the Cluster Missile module allows the missile to split into a spiralling group of missiles, saturating a large area with explosions. Adding the Extra Missile basically turns the missile into a Trinity Rocket from Call of Duty: Ghosts. This module can be taken twice, for an extra tracking missile. Adding the Hellfire Missile module basically turns it into a lesser version of the Hellstorm Missile from Call of Duty: Black Ops II. The Nano Swarm module leaves behind a group of nanobots that bounce around in an area for a period of time, killing enemies that enter its sphere. The nanobots can be ignored by using the Tier 3 perk Hard Wired.

The Missile Strike appears in Exo Survival, obtained from Orbital Care Packages that are dropped from the player filling their Support Drop meter. It is also given by default to the Demolitions class.

It is effective against A.S.T.s because of it being an explosive, and is also effective at taking out large groups of enemies for this reason as well. It does quite a bit of damage against enemy Warbirds, which can be very helpful in the process of attempting to take one down. However, the player must be careful, as it is easy to miss the Warbird if not manuvering the missle well. In later rounds, however, it is extremely hard to hit enemy Warbirds with the missiles, as the Warbirds are usually better at manuvering away from the missiles at this point. One problem with it though is that it leaves the player vulnerable while controlling it, so the player should be careful where they stay or they may be downed/killed by enemies, even though it doesn't take very long to finish using the Missile Strike.