For the similarly named Call of Duty: Black Ops Zombie Map, see Call of the Dead.

Survive for as long as possible against limitless waves of the Undead.

"Anchoring the second map pack is Mob of the Dead, Treyarch’s most terrifying Zombies experience to date. Top Hollywood talent rounds out a cast of four Prohibition-era gangsters – each with a unique set of skills – that are forced to fend off hordes of the undead while imprisoned on San Francisco’s notorious Alcatraz Island. While guard towers and new weapons offer tactical advantages, survival offers an unprecedented new challenge for these four lost souls."
— Map description

Mob of the Dead is the name of a Zombie Mode map appearing in the Call of Duty: Black Ops II Uprising DLC. It is the fifteenth Zombies map overall, occuring within Alcatraz Island. A partition of this map, Cell Block, is available in Grief mode.

Mob of the Dead is located on Alcatraz Island during the Prohibition-Era of American history and is the biggest map in Zombies history. The four playable characters are Michael Madsen as Finn O'Leary, Joe Pantoliano as Albert Arlington, Chazz Palminteri as Salvatore DeLuca, and Ray Liotta as Billy Handsome, all of whom are Gangsters who have been locked up on Alcatraz and were planning an escape on the night of the outbreak. Zombies on the island have red eyes. This map also introduces Guard and Prisoner Zombies on the island.[2]

The map features several additions to the players' arsenal. The Uzi and the AK-47 make their debut in Zombies, as well as the M1927 Thompson. The Death Machine is now a standard box weapon, and no longer a powerup. The LSAT is also featured, having only appeared in the zombie variant of Nuketown. Also returning from Nuketown Zombies is the Fire Sale power up. There is a  new Wonder Weapon featured, the Blundergat, a cross between a Blunderbuss and a Gatling Gun.  There is also a unique Tomahawk like weapon called Hell's Retriever, with a red aura. The weapon can pierce through multiple zombies and can reflect back to the player. These Tomahawks also seem to be able to be thrown at power-ups and retrieve them for the player.

Purchasable traps also return, last appearing in Ascension. The map features two new traps, the Fan Trap and the Acid Trap. A new utility is also introduced, the Gondola, which transports players between the main prison and another part of the island, similarly to the Zipline in Shi No Numa. Traps will are also upgradeable.

Mob of the Dead features a new boss zombie, known as Brutus, that can disable perk machines, workbenches used to craft buildable items, and the mystery box. Reactivating them requires 2000 points, though the cost scales up by 2000 with each utility disabled in a single round. He can be killed, but does not appear during his own round. Instead, he appears alongside other zombies, similarly to George A. Romero from Call of the Dead. Upon death he will drop a power-up. Additionally, Brutus will spawn inside the map if the player(s) spend too much money investing in the mystery box. He will also appear randomly throughout various hordes.

Mob of the Dead also introduces the new Afterlife Mode, a form of gameplay that the player spawns in and enters upon death. In the Afterlife mode, new areas and objectives will become available for the player to complete such as turning on the power[3][4] and specifically activating utilities such as cell doors with power ups in them and the Perk Machines throughout the map .Though, there is a time limit in the afterlife, once the blue meter has depleted, the player will be sent out of the afterlife.

Several side quests are also available for the player to complete, with the main one being to construct a plane to escape the island

After building "Icarus", players are able to fly to the Golden Gate Bridge, where Pack-a-Punch is located. They are able to return to Alcatraz by using the Electric Chairs.

For information on this Easter Egg and steps on how to complete it, see Pop Goes the Weasel.

"Pop Goes The Weasel" is the main easter egg on Mob of the Dead, and follows the playable character's attempts to escape the island. It is the first time ever in Zombies that the players can complete the level and end the game without being killed by zombies. It also marks the first time in Zombies that a playable character becomes hostile to the other players; to complete it successfully, players that are controlling Sal, Billy and Finn will have to kill the player controlling the Weasel.

The song "Rusty Cage" by Soundgarden can be played by activating 3 bottles scattered around the map.

The song "Where are we going" by Kevin Sherwood can also be played. This can be done by finding the warden's key, then unlocking the power switch with the numbers puzzle next to the elevator. Instead of activating the lift with the number sequence seen on the stairs, the player needs to input the numbers "115", and after that "935". The song will then play.

When on the roof where the plane is assembled, the player can activate a "jump scare" easter egg. The player is required to have a sniper rifle, such as the Barrett M82A1 or the DSR-50, and they must proceed to the far end of the roof, to the left of the runway. If the player scopes in on the firework display in the distance, a distorted picture of what appears to be Russman's face will flash up on the screen for a split second, accompanied by a high-pitched scream. [5] 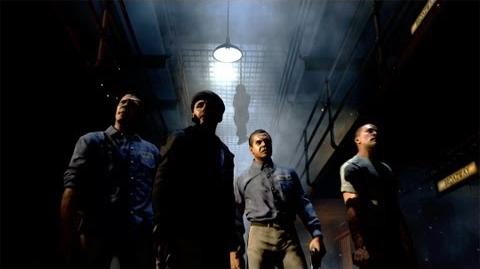 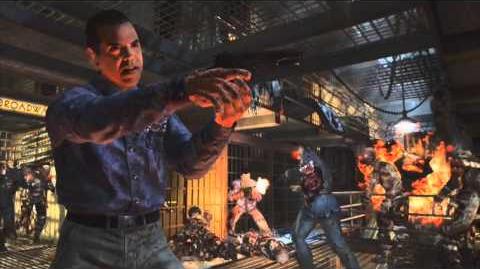 The characters of Mob of the Dead

Mob of the Dead exterior view

Retrieved from "https://callofduty.fandom.com/wiki/Mob_of_the_Dead?oldid=1903810"
Community content is available under CC-BY-SA unless otherwise noted.