The Model 1887 is used by the Ultranationalists in their armories in "Loose Ends" and the Militia in combat during "The Hornet's Nest" and in some cases "Takedown". It can also be found in the "Museum".

The Model 1887 is unlocked at level 67, making it the last unlocked shotgun. Prior to the patches, it was considered to be the most powerful shotgun available. It had the longest range and the option to use Akimbo, which countered its rather slow fire-rate. The 1.07 patch decreased the range of the Akimbo 1887s drastically; this was to response complaining that the Akimbo shotguns were too powerful. However, a mistake was made during the patch which did not remove range of the Blinged FMJ and Akimbo Model 1887, which then prompted the 1.08 patch which rectified the mistake. After the 1.07 patch, the 1887 received much less use due to the fact that it's outperformed by the SPAS-12 which has better range, damage and faster rate of fire, and is unlocked much sooner.

Although the wooden stock of the 1887 is sawed off, it still has average accuracy. It is a very potent weapon on its own, especially with Stopping Power and Steady Aim, which increases the chances of a one-hit-kill. One main problem with the weapon when not using Akimbo is that it has a very slow rate of fire, due to the lever action. When used with Akimbo, its fire rate is increased, but has a range similar to the Ranger, while the single 1887 has the same range as before the patches. It also has an oddly loud cocking sound which may give away the player position.

The Akimbo attachment can come useful when facing multiple enemies at close quarters, but it's advised to use it with Stopping Power and Steady Aim to maximize the chances of getting 1-shot kills. FMJ gives the Model 1887 some penetration capacity, but it won't affect much in combat, as the gun has a low rate of fire and suffers from low penetration, like all the other shotguns.

The Model 1887 is best used when flanking, as it's ineffective when taking more than one opponent. It's most effective with Lightweight in most maps, as the player can run to cover quickly if spotted and get ready for the next shot. Ninja is a good choice, as the player is likely to move often with shotguns, looking for close encounters.

An Ultranationalist runs with a Model 1887.
Add a photo to this gallery

The Model 1887 makes a brief appearance in Call of Duty: Black Ops, where it is used during "Vorkuta" in conjunction with a motorbike. It does not appear in any other part of the game, and now fires two shots before cocking the lever action. The cocking action is also quicker than in Call of Duty: Modern Warfare 2. Its high damage lets it gib.

It can also be obtained using the "give all" cheat in the console commands on the PC version of the game. It seems to use the same stats as the SPAS-12, and the same reload animation and firing sound.

The Model 1887 reuses its model from Call of Duty: Modern Warfare 2.

Reloading animation on the Model 1887.

Third person model and pick up for the Model 1887 in Black Ops.
Add a photo to this gallery

The Model 1887 makes an appearance only in the mission Back on the Grid in the hands of the African Militia.

The Model 1887 is the last unlocked shotgun, available at level 62. The Model 1887 has decent damage at range for a shotgun, but it features the second slowest rate of fire of all shotguns, tied with the SPAS-12, and only slightly faster than the KSG 12, as well as having the second worst pellet spread, after the AA-12 which causes it not get one shot kills unless in very close quarters. This can cause problems when encountering more than one enemy at once, or if a single shot fails to kill the enemy. When in a head-on gunfight, it's advised to fire from cover to get ready for the next shot, if more than one is needed. The Damage Proficiency is highly recommended, as with all shotguns.

Unlike its Call of Duty: Modern Warfare 2 counterpart, the Model 1887 has no available attachments for unlock. Despite this, the Attachments proficiency is available, but it cannot be selected, as it is greyed out.

The Model 1887 is available in Survival Mode by default and costs $2000. The Model 1887 is also carried by light troops in early waves on the tier 1 and tier 2 maps. It can kill the light and medium troops in one shot, however it must be a direct hit, otherwise it won't kill. The slow rate of fire reduces the weapons potential as well. 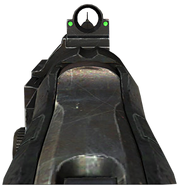 The gun's sights. Note the two green dots on the rear sight.

The words "Hasta La Vista" are engraved onto the gun's hammer.

The Model 1887 in third-person view.
Hasta la vista.png
A close look at the engravings on the Model 1887's lever.
Add a photo to this gallery

Retrieved from "https://callofduty.fandom.com/wiki/Model_1887?oldid=1499776"
Community content is available under CC-BY-SA unless otherwise noted.