Private Moditch was a member of the Special Air Service. He was a part of Ingram's Sicily Raiders. Moditch's prominent role is was covering Doyle while he and his team took the bunker and held the motor pool underground. He was killed and flow off the kubelwagen when a German Panzer took out his Kubelwagen and took the rest of the soldiers the cliff. The player can see Moditch body lying on the ground. He is not mentioned again in the game. 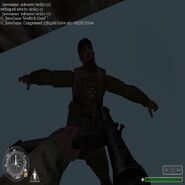 Moditch's corpse.
Add a photo to this gallery

Retrieved from "https://callofduty.fandom.com/wiki/Moditch?oldid=2456401"
Community content is available under CC-BY-SA unless otherwise noted.