"Fascinating... C4, insulated wire and a cheap toy and blammo! Crude, but effective."
— Marlton Johnson, when obtaining the Monkey Bomb from the Mystery Box in Green Run.

The Monkey Bomb (also known as the Cymbal Monkey, Surprise Monkey or the Monkey) is a secondary tactical grenade first appearing on the Zombies map Der Riese. The Monkey bomb lures zombies to it while playing a jingle, then explodes. While active, zombies do not pursue the players.

The Monkey Bomb was created by Dr. Edward Richtofen as shown by a document from vbush on the Call of Duty: Black Ops terminal, referring to to an easter egg in Der Riese and The Giant in which it screams on fire. According to Primis Richtofen, the monkey bomb started out as a toy for Samantha, but she could never get to play with it.

It returns in Call of Duty: Black Ops II in the game mode/map TranZit, it also appears in other modes for the four other areas/maps available; Bus Depot, Diner, Farm, Town. It also appears in Nuketown Zombies, Die Rise, Buried, Borough, and Origins.

It returns in Call of Duty: Black Ops III, available in the maps The Giant, Der Eisendrache, Zetsubou No Shima and Gorod Krovi.

It returns once again in Call of Duty: Black Ops 4 in the Zombies maps Blood of the Dead, Classified, Alpha Omega and Tag der Toten, as well as in the Blackout battle royale mode.

It returns yet again in Call of Duty: Black Ops Cold War where it is available as a support equipment for 1000 Salvage.

It is also featured in Call of Duty: Vanguard where it is, like Cold War, available as a support equipment.

The Monkey Bomb was first discovered in Call of Duty: World at War in one of the achievements Treyarch released on their website. The achievement/trophy "Acquire Waffle Weapons" requires a player to have the Ray Gun, Wunderwaffe DG-2 and the Monkey Bomb simultaneously. In the Der Riese trailer it is shown as a "Cymbal-Banging Musical monkey toy" that has a bomb attached to it. When thrown, the Monkey Bomb plays a short jingle, then explodes. It attracts zombies until it explodes, killing the group of zombies around it. However, the Monkey Bomb will not attract Hellhounds, though the explosion can still kill them. On the iOS app, the Monkey Bomb will attract zombies and Hellhounds alike.

Up to three can be carried at a time (except on the iOS app, where two are received and these are dropped instead of thrown). The Monkey Bomb is used by pressing the tactical grenade button. When thrown, the player will first wind the monkey and then fix its hat (this takes about one and a half seconds). This extends the period before throwing which can be lethal if the player gets cornered. On the iOS app, it takes approximately seven seconds before the Monkey Bomb is dropped. If a grenade explodes next to the Monkey Bomb, it will not cause the Monkey Bomb to detonate prematurely. It attracts all zombies to the bomb for around seven seconds, and explodes. While the explosion is usually non-lethal, it will likely make crawlers.

The Monkey Bomb is often thrown to allow the player(s) to reload, retrieve power-ups, or revive downed players. Monkey Bombs are also replenished by a Max Ammo power-up. Therefore, throwing one to retrieve one is not a waste. Another good strategy is to get close to the horde of zombies around the monkey and either throw Stielhandgranates or fire Wunderwaffe DG-2 or Thundergun blasts, which will quickly kill all of the zombies. More points can be obtained if done with a bullet firing weapon, such as an MG42 or HK21.

A smart thing to do is if there is a Max Ammo power-up is the player should waste all of their Monkey Bombs, because they will be replenished when the power-up is obtained. However, a Monkey Bomb will not be given if one is being primed to throw.

The Monkey Bomb is a new tactical grenade that can only be obtained through the Mystery Box in Der Riese and is activated by pressing L2 (PlayStation 3), the 4 key (PC) or Left Bumper (Xbox 360) on Default Control settings, as with any tactical grenades.

The Monkey Bomb's origin is unknown, although evidence that the Monkey Bomb is made from a real monkey can be found in the character biography of Dr. Richtofen where it says, "He has a collection of stuffed animals, most of them posed in positions of terror at the instant of their death." Since Richtofen worked at the Der Riese facility, it is highly possible that he had something to do with their creation, and that they are in fact stuffed monkeys which he had cruelly killed.

It is also hinted that the Monkey Bomb was once one of Samantha Maxis' toys and is now possessed. This is strengthened by the fact that it says, "Here I come, Sam" or "You're not Sam!" and after a Monkey Bomb explodes, the surviving zombies will sometimes say "Sam", "Monkey" and sometimes even "Play time!" This is further backed up by an easter egg in Der Riese. If the Monkey Bomb is thrown into the furnace, it will not play its normal polka music. Instead, it will hop around inside of the furnace and scream out in pain. After the monkey explodes, a female voice, presumably Samantha, yells at the player: "Why are you so cruel to Mister Monkey!? Mister Monkey just wanted to play!". A similar Easter also returns in The Giant.

The Monkey Bomb appears unchanged in Kino der Toten, Five, Shangri-La and the returning maps from Call of Duty: World at War.

The Monkey Bomb does not appear in Ascension, Call of the Dead or Moon as it is replaced by the Gersh Device, and the V-R11 since both of these attract zombies in their own way.

The Monkey Bomb appears the same as it did in Call of Duty: Black Ops. It is featured in Green Run and all its sub-maps (Town, Farm, Bus Depot), as well as Nuketown Zombies, Die Rise, Buried and Origins. The only real difference is that the song plays on a different tune than the previous games. Richtofen, interestingly does not remark about the Monkey Bomb, despite it having been his creation. It is the only tactical grenade so far to appear in all three zombie games. It also appears in the game mode Turned as a power-up for the human. It spawns a dummy human that stands still and makes the human player invisible. If the dummy is attacked, it will blow up.

The Monkey Bomb appears in The Giant, Der Eisendrache, Zetsubou No Shima, Gorod Krovi and the remastered versions of Nacht der Untoten, Verrückt, Shi No Numa, Kino der Toten, Shangri-La, and Origins as the Cymbal Monkey. It functions mostly the same as it did in previous installments, with the visuals updated to reflect a more grimier version. The throwing appears to be a bit faster, by about two seconds, but plays the same music and has the same quotes. A glitch may occur in which zombies will not be attracted to the Monkey Bomb, rendering its primary function obsolete.

In Gorod Krovi, the Monkey Bomb can be upgraded by doing the following steps:

The new Mega GobbleGum called Crate Power can also be used to upgrade the Monkey Bomb for individual players. The upgraded Monkey Bomb will kill any zombies touching it while it is still attracting them, also dealing more damage than its predecessor. The weapon's voice when priming is changed, sounding slightly demonic, while the music is electronic instead of an accordion.

The Monkey Bomb in Call of Duty: Zombies.

A Close-Up of the Monkey Bomb in Call of Duty: Zombies.

A thrown Monkey Bomb in Call of Duty: Zombies. 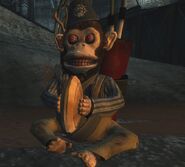 A Monkey Bomb in World at War. 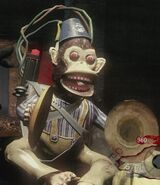 Monkey Bomb as it appears in Call of Duty: Black Ops.

The Monkey Bomb in Moon obtained via console commands. 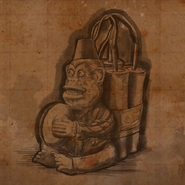 A drawing of a Monkey Bomb as seen in the Zombies Chronicles timeline poster.