For the Corporal with the same name, see Monty (Big Red One).

"This... is... it. The Aether, the infinite, the reality beyond. Beyond the world you know, beyond your perception. Things are going to get a lot worse before they get better. You changed the rules. There are certain things that you can't ever change. All I ask, is that you do the right thing. The right thing for everyone."
— Dr. Monty

He is the creator of most of the features in the mode itself: the GobbleGum Machine and the Factory that creates them, the appearances of the Mystery Box, chalk drawings, Power-Ups, Persistent Upgrades that appear in all the Zombie maps.

He is also a member of the ancient Keeper race, though throughout all his appearance he has only assumed a human form of an old British man wearing a signature red scarf.

He is mentioned by Edward Richtofen in the Call of Duty: Black Ops 4 map, Blood of the Dead, and is mentioned in a cipher in Classified by Ludvig Maxis before making a physical appearance in the ending of Alpha Omega, as well as in the ending cutscene for Tag Der Toten.

"Monty and Shadowman were more similar than you know, Richtofen. Both were corrupted by the Dark Aether. One by his own ambition, the other, desperately trying to save his friend."
— Nikolai explaining the origins of Doctor Monty and the Shadowman

Monty, like his Keeper brethren, existed since the very beginning of the universe. Not much is known about his history, other than that he used to have one person he considers his best friend. That person would later be corrupted by the energy of the Dark Aether, and be known as the Shadowman. In a desperate attempt to save his friend, Monty too became corrupted by the Dark Aether. After a war breaks out, Shadowman and the rest of the corrupted Keepers were banished to the Dark Aether, where they would eventually mutate into Apothicons. Monty and the Keepers took up the mantle of guardians of the universe, watching from afar and only interfering when the universe is in a state of imbalance.

Influence on the WorldEdit

On October 28th, 1945, upon the teleportation of four individuals: Edward Richtofen, "Tank" Dempsey, Takeo Masaki and Nikolai Belinski (otherwise known as Ultimis), the universe began to show instability. Due to Monty being unable to directly interfere (violating human's free will), he offered indirect support through "little nudges", such as assisting Group 935 in producing special elixirs that would be later known as Perk-a-Colas, and adding chalk outlines of weapons all around. Despite his claim of only giving "little nudges", he would later influence the German scientist known as Ludvig Maxis to create the teleporter. It wasn't until the arrival of a drone carrying a human brain at Agartha that forced Monty to take a different measure. Using his power, Monty created a physical body for Maxis resembling that of his own in Dimension 63, and allowed him to reside at the House in Agartha. He then retrieves Samantha Maxis from the original timeline, wiping out the Maxis of this dimension from existence as well; however, realizing that Samantha had been corrupted by the Dark Aether as well, he was forced to separate the father-daughter pair, and returned her to him later after cleansing her soul and restoring her innocence.

Monty then informs Maxis that the only way to save everyone at this point would be to separate Agartha from the rest of the multiverse, sealing it from Apothicon influence. He instructs Maxis to find the Kronorium, a book which contains the location of an artifact called the Summoning Key, which can collect and store souls that survive the fracturing of the universe. After having Primis Richtofen retrieve it from Morg City in Dimension 63, Monty then accepts an innocent Richtofen soul, named Eddie, from Dimension 2210 into the House. He introduces Eddie to Samantha, and provided them toys to play with, comprising of various Zombies characters. He would keep a close watch on Richtofen later on, due to a sense of mistrust, and the nature of himself and his companions.

After Richtofen sends the souls to the House, Monty introduces himself by only speaking to Dempsey, Nikolai and Takeo, believing that Richtofen is doing "his own thing". He explains to them that he's suspicious of Richtofen's plans and tells them that everything will make sense once they reach "the House". He also attempts to explain his role in shaping up the universe, and his "nudges". Primis would then return to the House, where they destroy the teleporter and seal Agartha off from the rest of the multiverse.

However, Maxis would eventually be manipulated into accidentally releasing the Shadowman from the Key. While Monty tries to hold the dimension together due to the Apothicon's invasion, Primis would then try to find a way to defeat the Shadowman. Monty tries to reach out to Primis, telling them of the story behind the Keeper and Apothicon conflict, as well as the difficulty of his role. Eventually, with the help of Sophia, Primis defeats the Shadowman, and the Apothicons are banished once more, with the Summoning Key (containing Maxis and the children) lost in deep space. As Monty begins to ponder the future of his perfect world, he finds that Primis somehow remains alive, rather than disappearing from existence. He discovers that the four of them have consumed blood of souls that came from closed dimensions, thus causing a paradox. He contemplates wiping them out of existence as well, but then realizes that the better option would be to send them back to medieval times to assist the Keepers in the Great War, effectively solving the paradox and completing the cycle of the universe.

At some point, Monty begins to watch over Ultimis and Primis once more, this time laying out recordings of himself talking about the events that transpired at the locations that both crews once visited in the previous cycles.

In truth, Monty's plan was revealed to never have been about saving the universe. As Maxis found out, humanity was doomed to relive the cycle over and over the moment Element 115 was discovered. The only way to truly save it was to purge 115 from existence, before humans could ever find it. However, Maxis suspected that doing so would negatively impact Monty, thus explaining why he never chose to do this and would rather perpetuate the cycle.

When Primis manages to break free of the cycle during their time at Alcatraz, the group's plan changed from securing all the souls to defeating Monty. While they and their Ultimis counterparts work together to recover an Elemental Shard (per Primis Nikolai's instructions), Monty begins to suspect something is off. Maxis attempts to contact Richtofen, informing him of Monty's true plan. After Primis and Ultimis acquire the shard, Maxis finally reaches them, warning them of Monty's awareness of their plan. Monty, now realizing the truth, turns into his true form and devours Maxis, but not before he manages to teleport Samantha and Eddie away. At Camp Edward, Samantha reveals her intentions to kill Monty and destroy Agartha.

After awakening Victis, Ultimis Richtofen informs Stuhlinger of Monty (which he misinterprets as "Doctor Minty"), to which Stuhlinger asks if he is a "bad guy". It is revealed through a radio-log recorded by Pablo Marinus that the cycle is the only thing keeping Monty alive.

Shortly after escorting the Agarthan Device across the map, Victis overhears a conversation held by Ultimis and Primis, describing the duality of Monty and the Shadowman. Primis Nikolai points out the fact that the two are more similar than they are different, as both were corrupted by the Dark Aether. It is at this point that Nikolai reveals that Monty was corrupted by the Dark Aether attempting to save the Shadowman. Almost immediately after, Ultimis and Primis are killed off, and the Summoning Key is destroyed, plunging Monty and Agartha into the Dark Aether forever. 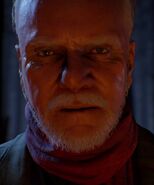 Drawing of Monty during Revelations teasing.[1][2]

"I will set things right, with or without the help of Doctor Monty."

Doctor Monty as seen in the Call of Duty: Zombies comic 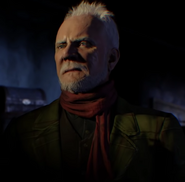 Monty looking at Ultimis Nikolai's soul turn into a child.

Monty in the Alpha Omega intro.

Monty and dozens of Keepers in Alpha Omega intro.

Doctor Monty, as seen in the Tag der Toten outro.
Add a photo to this gallery 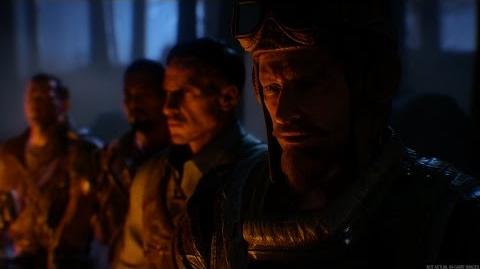 Retrieved from "https://callofduty.fandom.com/wiki/Monty_(Zombies)?oldid=2510454"
Community content is available under CC-BY-SA unless otherwise noted.