Sergeant Moody is an American non-commissioned officer who served with the 506th Parachute Infantry Regiment during World War II as featured in Call of Duty and Call of Duty: United Offensive. Moody often fills of the role of second-in-command under Captain Foley, and follows Foley as he transfers units. His skilled driving has been featured in both games.

A Sergeant in the United States Army, Moody volunteered to be a part of the elite paratroopers in July of 1942. In August 1942, he was assigned to Baker Company of the 506th Parachute Infantry Regiment as a non-commissioned officer in Camp Toccoa, Georgia. He personally oversaw the weapons training of the company, which included Private Martin. He traveled with the 506th for the duration of its training, shipping out to England to prepare for Operation Overlord.

On 6 June 1944, Sergeant Moody parachuted onto the outskirts of Sainte Mere-Eglise, linking up with Captain Foley's mixed unit after it had secured the town of Ste. Mere-Eglise. The following morning, the paratroopers set up defensive positions, with Moody and the men under his command holding the main force's flank. After repelling a counterattack staged by German armor and Fallschirmjäger, Moody took part in an assault on a German mortar position at the edge of the town, successfully eliminating it. After finding a Peugeot 202 in a garage near the mortar position, Captain Foley orders Moody, Martin, and Private Elder to drive Route N13 and break the German lines in an attempt reach Battalion headquarters. Moody drives, demonstrating amazing skill in outmaneuvering German Kübelwagens and roadblocks. However, when a Tiger I pinned the team, they abandoned the car, fighting through the small town they had entered and reaching a Kübelwagen parked in a garage. Briefly covering Elder while he hotwired the vehicle, the team bolted out of the town, narrowly escaping the cannon of the Tiger tank which had trapped them prior. Throughout the ride to headquarters, Moody berates Elder for his comparatively poor driving under pressure.

Baker Company was directed by Major Sheppard to eliminate a German artillery battery north of the village of Sainte-Marie-du-Mont. Moody lead one of the teams and, after destroying several artillery pieces and eliminating the surrounding German machine gun emplacements, retrieved several pieces of intelligence and linked up with the team lead by Lieutenant Tucker. When he linked up with Tucker, he noticed that a wounded paratrooper had been cut off outside of the trench and was under heavy fire. After a Medic refused to rescue the man and was eventually killed, Moody climbed the trench in an attempt the carry the man back to the trench. Depending on player choice, Moody succeeds in carrying the man back, giving Martin his remaining explosives and staying back to patch him up. If the player fails to render adequate suppressing fire, however, Moody himself is wounded, in which case Martin must retrieve his explosives and carry on with the mission.

After the conclusion of Operation Neptune, Baker Company is detached from the rest of the 506th for special operations behind enemy lines. On 7 August 1944, a small detachment from Baker Company lead by Foley and Moody parachuted into the Bavarian Alps to rescue Captain Price and Major Ingram. After fighting through a checkpoint and clearing the chateau, the team rescued Price but discovered that Ingram had been moved to a prisoner of war camp in Austria. Sergeant Moody did not take place in the rescue operation on 18 September 1944 with Foley and his detachment.

Main article: Battle of the Bulge

By late 1944, Sergeant Moody and Captain Foley were transferred from Baker Company to Fox Company of 2nd Battalion. As German forces attempted to breakthrough the Allied lines in the Ardennes Forest with the intent of capturing the strategic port in Antwerp, Moody as well as the rest of the 506th were rushed to the crossroad town of Bastogne. The 506th arrived on 19 December and was placed on the northeastern flank of Bastogne to halt the German advance from Foy. As 2nd Battalion arrived on the frontline, it dug in, preparing for an attack from the 76th Volksgrenadier Division and 2nd SS Panzer Division. On 26 December, the Germans launched a large scale assault on the American line. Leading a jeep patrol at the time of the attack, Moody showcases his expert driving once more as him, Private Ender, and Corporal Riley traverse German territory to return to Battalion headquarters.

On 13 January 1945 around 0200 Hours, Moody leads a team in a coordinated attack on the crossroads just south of Foy, rescuing a missing combat patrol and facilitating the attack on Foy itself later the day. During the operation, Moody rescues another wounded man pinned down by German forces, similar to his performance during the assault on Brécourt Manor during Operation Neptune. At 1100 Hours, Moody, along with the rest of Fox Company, initiates the attack on Foy, defeating a large German force, destroying a small armored unit, and capturing the town. Two days later on 15 January, Moody would take part in the attack on Noville, capturing the city and repelling a massive German counter offensive until reinforcements and air support arrives.

"Gee I﻿ don't know, how about you try shooting the bastards!"
— Sgt. Moody's response to Pvt. Elder's question about what to do

"Believe it! Unless you sprout wings and wanna fly. It's only six miles Private, just shut up and do your job."
— Moody's response to Elder grousing

"God's busy! This is on you!"
— Moody tells Elder to stop praying and start working 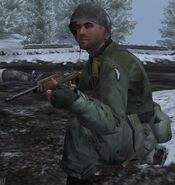 Moody with a M1A1 Carbine.

Sgt. Moody in "Crossroads".
Add a photo to this gallery

Retrieved from "https://callofduty.fandom.com/wiki/Moody?oldid=2492253"
Community content is available under CC-BY-SA unless otherwise noted.