Mortar is a support weapon used to suppress targets with shells, and are used throughout the Call of Duty series.

In Call of Duty 2, mortars are used directly by the German Military. Mortars are seen in many levels, such as "The Pipeline" and "The Crossroads". In some missions a hint may appear saying that the player should look for smoke, because that's where the mortars are firing from. Also, two soldiers make up the German mortar teams. 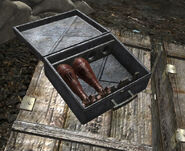 In Call of Duty 4: Modern Warfare, mortars are used by the Ultranationalists in the level "Heat"; they target the player's position near the church. An unusable Mortar can also be found on the explosives training range of "F.N.G.".

The mortar seen in F.N.G.

In Call of Duty: World at War, mortar pits are also seen in "Blowtorch & Corkscrew" and "Breaking Point". It seems like they were going to be usable at the end of "Blowtorch and Corkscrew", but it was cut from the final version. In "Breaking Point", the player fires mortar shells without the actual mortar, just like at the end of the movie, Saving Private Ryan. They are not found in missions that take place on the Eastern Front.

In Call of Duty: Modern Warfare 2, they appear in the levels, "Team Player" where they can be seen being used by the OpFor guerrillas across the river in the very beginning as the player cross the bridge. Also in "Loose Ends" where they actually are used by Makarov's Ultranationalist rebels. They can also be seen as scenery on top of roofs in the Call of Duty: Modern Warfare 2 version of the multiplayer map Strike.

A Mortar in "Team Player". Note that it is a model from Call of Duty 2

Reznov also passively uses a mortar in Call of Duty: Black Ops in the mission "Project Nova" where the player throws a Smoke Grenade at the Mortar Targets. Also the Mortar Team killstreak is available in multiplayer.

A box filled with mortars used by the Soviet soldiers

3D models of the Mortar

The mortar is a usable emplacement on top of a tower in the mission "Back on the Grid", with the ability to destroy huts and technicals with one shell. This is the first time in the Modern Warfare series and Call of Duty series made by Infinity Ward where the player can actually use the mortar.

Mortars are used by the MPLA in the level Pyrrhic Victory, in which the player is tasked to clear the mortar teams. The M29 Mortar Shell is also a usable weapon that can be found in several places in the campaign accessible only with the Access Kit. It acts just like it did in Call of Duty: World at War, being primed by hand then thrown rather than fired through a mortar. 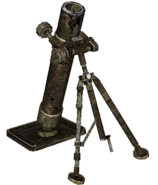