They are only found in the levels "Burn 'em Out" and "Breaking Point". Picking one up from mortar crates results in the player's character striking the tip of the mortar shell on a hard surface, effectively priming it. The mortar round can then be thrown, resulting in an incredible explosion. They are used as a means of destroying the multiple Japanese outposts. They are extremely powerful and have a large blast radius - probably the reason they were not included in multiplayer. They are found in mortar pits. Mortar rounds can also be used to blow up buildings and can become a great advantage if the player is caught with no grenades because they are deadlier and more explosive than grenades, and are extremely effective. Some people take them with them when leaving a pit to enter the next area. They detonate when they come in contact with anything so use them carefully.

From the file zombies.str it can be ascertained that at one point, mortar rounds were available for purchase in Nacht der Untoten; where it would've cost 2000 points.[1] It also seems to have been planned for multiplayer, as there is a file named "mortarround_mp".

A held mortar round. 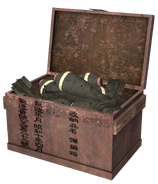 Mortar rounds on a crate.

The Call of Duty: World at War mortar round is used in the Mortar fired by Soviet soldiers in "Project Nova", plus the Mortar Team killstreak in Multiplayer. All the legacy World at War scripts for player use remain as well as the viewmodel.

M29_Mortar_Shell_pickup_icon_BOII.png
The M29 Mortar Shell is a usable weapon that can be found in the campaign levels "Pyrrhic Victory", "Old Wounds" and "Time and Fate". It is accessible only with the Access Kit, and acts just like it did in Call of Duty: World at War, being primed by hand then thrown rather than shot through a mortar. They occupy an equipment slot, and therefore must be equipped by pressing right on the d-pad (consoles) or 3 (PC) before being thrown with the fire button. They can also be primed with an Animal Trap to cause it to explode when it traps an enemy.

In the Call of Duty: Black Ops III Zombies map Zetsubou No Shima, a Mortar Round can be obtained from a Harvest Pod while in the process of completing the Seeds of Doubt easter egg. Once obtained, the player must insert it into the FlaK 88 cannon at the anti-aircraft platform in the map.