The Mortar Strike, when activated, will cast three mortar shells to detonate at random areas around the user shortly after activation. The user cannot control where exactly the Mortar Strikes individually go. As a result, even when fully upgraded, the Mortar Strike is very unpredictable.

Because of the Mortar Strike's unpredictability, it is one of the least popular Strike Packages in the game, rivalling the Trinity Rocket for the least popular in this regard. Several mortars in the Mortar Strike will often fail to do anything, with usually only a percentage of the mortars actually inflicting damage. A successful hit does great damage, typically getting an instant kill on Scouts, Hunters, and Scorpions. A Mortar Strike will not kill a Rhino outright, but can deal good damage to it, and can soften up the Rhino to make it easier to kill.

The Mortar Strike returns in Call of Duty: WWII. It appears in the Campaign and killstreak item in Headquarters. In Campaign, a character named Frank Aiello, who has a squad ability that gives the player smoke grenades to signal in a mortar strike. In multiplayer, it's a 750 scorestreak. The user can select 3 target areas when activated. Afterwards, 3 mortars missiles will bomb the area of desgnation. One mortar missile bombing has a similar area of effect and effectiveness to the Glide Bomb.

When selcting 3 target areas, it's a good choice to prime on objective points like in Domination to eliminate hostile strongholds. However, when overlapping target areas due to the multiple location designations, it coverage and damage greatly increases.

Though the AoE and effectiveness is similar to the Glide Bomb, the results vary similar to the latter. When overlapping designations, it only targets one section. To improve the usage of this streak effectively, think strategically will offer the best results. 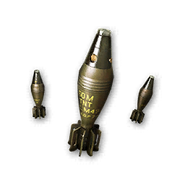