Moscow is a multiplayer map featured in Call of Duty 2.

The snowy map is frequently favored by snipers and, oppositely, for close range combat. The player should be advised that both places have multiple entrances so it is relatively easy to be flanked and killed from behind. There are multiple walls to take cover behind.

There are two mounted MG-42's on this map. one near the north-west side of the main courtyard, and an other one at the south-east corner of the courtyard. 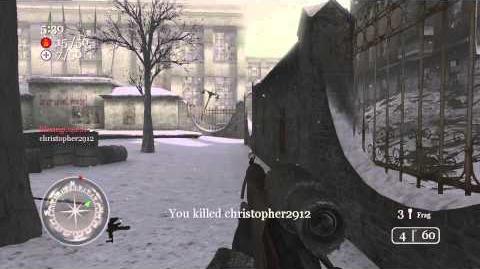 Call of Duty 2 Team Deathmatch Moscow 1 25 13
Gameplay in Team Deathmatch.
Add a photo to this gallery
Retrieved from "https://callofduty.fandom.com/wiki/Moscow_(map)?oldid=2520633"
Community content is available under CC-BY-SA unless otherwise noted.