A clip of Mosin-Nagant Ammunition is a "weapon" first featured in the Call of Duty level, "Stalingrad," and is used again in the level, "Not One Step Back" in Call of Duty: Finest Hour. The "weapon" is not actually used to attack anyone, as the character is not even allowed to perform a melee attack with it, but it is used to load a Mosin-Nagant rifle that the character must find on a fallen comrade later in the level.

The Mosin-Nagant Ammo makes its debut in the level "Stalingrad" in Call of Duty. The only thing the ammo is used for is insertion into a Mosin-Nagant rifle. The "weapon" looks just like every bolt-action rifle's stripper clip. The only instance in which this weapon can be obtained without using the "give all" cheat is in the level Stalingrad, and it is only usable for a short amount of time before a rifle can be obtained.

The reason the player gets the clip and not the rifle is because in the level, which is based on the movie Enemy at the Gates, when soldiers made it to the supplies, one man gets a rifle, and another gets a clip of Mosin-Nagant ammunition; the idea is that when one man dies, another soldier picks one of the two that he needs off his fallen comrade (it is said by a commissar on the line "one man has the rifle, and the another does not have the rifle. The man with the rifle shoots, the man without the rifle follows. If the man with the rifle dies, the man without the rifle will grab the rifle and shoot!". The line the player is in for supplies, though, never provides a rifle. It is notable that the founding members of Infinity Ward said that the reason they formed Infinity Ward was because they wanted to do surprising and shocking set pieces, such as the sequence in which the Mosin-Nagant Ammo clip is used. At the next level, where a rifle is usable, the Ammo clip is unused, as some fallen rifles with four rounds and unloaded, less than the five rounds of the clip and those five rounds aren't added. 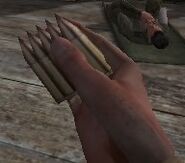 Pulling out the Mosin-Nagant Ammo

The Mosin-Nagant Ammo appears in the same level, an enhanced version of "Stalingrad", in exactly the same situation, and is used in exactly the same manner as in the original Call of Duty; the level it appears in, however, is named "Not One Step Back". When attempting to fire with this "weapon", the clip is lifted up into the player's sight for a few seconds.