For the similar equipment in Call of Duty: Modern Warfare 3, see Portable Radar.
For the wrist-mounted version in the campaign of Call of Duty: Ghosts, see Heartbeat Sensor.

The Motion Sensor is similar to the Portable Radar in Call of Duty: Modern Warfare 3. It is a piece of equipment that finds enemies by a little circular ping. It is similar to the Heartbeat Sensor. Allies are not able to see the motion sensor on the mini-map. It can be hacked if a player has the pro version of the perk Hacker, and players with Hacker Pro will remain undetected by the motion sensor. Note that the Motion Sensor is not limited by any material or height. The motion sensor does not time out, it remains useful until destroyed, picked up, or when the player dies.

Being a portable Spy Plane means it works almost just like it; it has a short delay between 'pings', which could prove fatal to the owner if an enemy is fast enough to avoid it. Its use in Hardcore is limited as its findings can only be shown through the mini-map, which is disabled in hardcore. This can be mitigated by looking at the map on the pause menu.

The Motion Sensor seen in Create-A-Class 2.0.

The Motion Sensor being held. 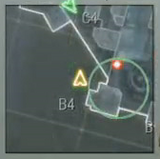 The Motion Sensor in action. Notice the green ping.

"Paints the targets with tracers that allow enemies to be tracked through objects."
— In-game description

The Motion Sensor appears in Call of Duty: Ghosts. Instead of showing a ping to its similar predecessor the Portable Radar, it will paint the enemy with an orange glow. The top of the Motion Sensor launches up as an enemy approaches it similar to a Bouncing Betty, and it also briefly induces the victim with a flashbang effect. This paints enemies in a similar way to the Oracle and Recon. Users are able to see the painted enemies through walls. This effect goes away after 15 seconds. The Motion Sensor is ineffective against users that use the perk Incog.