For an Infinite Warfare Zombies perk with a similar name, see Mule Munchies.

Mule Kick is a Perk-a-Cola that is featured in the game mode Zombies and Cyborg Rising. It was introduced in the Call of Duty: Black Ops Zombies map Moon. It allows the player to carry three weapons at once. It costs 4000 points to purchase, making it tied with Widow's Wine for the most expensive Perk-a-Cola. When purchased, the player will not see any effect except for the symbol appearing on their HUD. When the player goes to buy their next weapon, the prompt will still state that taking it will replace the currently selected weapon, but in reality it will take its place in the third slot. The color of this perk is dark green (although the color of the drink is dark red) and the icon is three pistols, one behind the other from bottom to top.

If a player is downed whilst this perk is in effect, or if a Space Monkey succeeds in removing it in Ascension, the player will lose the perk, and as a result, the third weapon slot.

Starting from the September 27, 2011 patch, Mule Kick is now available on all maps in Call of Duty: Black Ops for PlayStation 3 and Xbox 360. It came to PC along with Patch 1.15 on October 11th, 2011. However, the player must be connected to PlayStation Network, Steam or Xbox LIVE for Mule Kick to appear on other maps than Moon.

Mule Kick appears in Cyborg Rising mode of Call of Duty Online, translated as Slaughter Tool Cola. It is exclusive to the character Cowboy, and is awarded to the player after surviving six rounds. 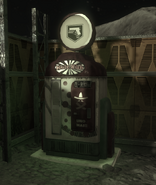 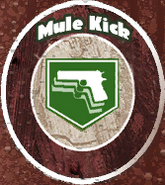 The Mule Kick logo, from the texture files. 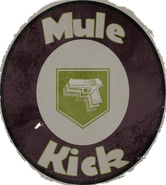 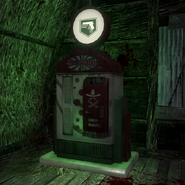 Mule Kick in Shi No Numa.

Mule Kick in Mob of the Dead.

Mule Kick HUD Icon as seen in Shadows of Evil

Mule Kick's icon in Black Ops 4.
Add a photo to this gallery

Retrieved from "https://callofduty.fandom.com/wiki/Mule_Kick?oldid=2500694"
Community content is available under CC-BY-SA unless otherwise noted.