Leader of the Mujahideen

"No. No, you are, and always will be, our true enemy."
— Rahman upon betraying Mason, Woods, Hudson, and Zhao.

Mullah Abdul Rahman (Farsi Pashto: ملا رّحمان) is a character in Call of Duty: Black Ops II. He is a Mujahideen leader. On September 1986, he made a deal with Jason Hudson, that if he, Mason, and Woods helped the Mujahideen defend their base, he would give intel on Raul Menendez. However, unknown to the CIA agents, he was secretly allied with Menendez. After the team defended the Mujahideen base and interrogated Lev Kravchenko then executed him, Rahman betrayed Woods, Mason, Zhao, and Hudson and left them tied up in the desert to die. 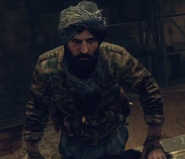 Retrieved from "https://callofduty.fandom.com/wiki/Mullah_Rahman?oldid=2563347"
Community content is available under CC-BY-SA unless otherwise noted.