Munich is a canceled multiplayer map that was planned to be featured in Call of Duty: Black Ops.

Munich seems to be a map based on the Olympic Village in Munich, Germany. This map was recreated in the First Strike DLC by Stadium. Most of the buildings are the same but with different color schemes. 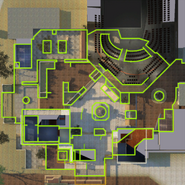 Munich minimap.
Add a photo to this gallery
Retrieved from "https://callofduty.fandom.com/wiki/Munich?oldid=2516734"
Community content is available under CC-BY-SA unless otherwise noted.