For the canceled map in Call of Duty: Black Ops, see War Museum.

Rangers (although there is no AI squad)

"Museum" is a level unlocked upon completing the Call of Duty: Modern Warfare 2 campaign mode and Call of Duty: Modern Warfare 2 Campaign Remastered It contains many of the weapons and some of the vehicles featured in the game. The vehicles, however, cannot be driven, are indestructible, and not to scale. It also features many characters from the game.

This level takes place in a museum in Encino, California, U.S.A. featuring many exhibits.

In the character exhibits is an information kiosk with a red button, which when approached will say "Do NOT press". If interacted with, the figures in that room will become active and turn into enemies that will actively seek out the player. Only one room of enemies can be active at a time - when the button is pushed, the figures in the other room will despawn. When the last enemy is killed, a helicopter sound can be heard, signifying that the figures in the other room have reappeared. In the second room, the two swimming operatives and the hostages do not count as enemies since they cannot move and attack the player.

To respawn the figures, players must enter one of the other two rooms that were not entered; for example, if the player killed a figure in room 1, they must go to room 2 or 3 to respawn the killed figure(s).

Players can also attack the figures without having to press the button; they will die in one hit, including the Juggernaut. Pressing the button simply makes them an enemy with normal strength. Note that special characters, like Price, will have more durability compared to a common soldier. The dog featured in the mission Takedown's exhibit is also a combatable enemy, functioning like a normal campaign dog.

There is no way out of the museum; if players want to leave, they must quit the mission.

To adjust the difficulty of this level, one must start another level on the desired difficulty before starting this level.

"Of Their Own Accord" Exhibit.

"Of Their Own Accord" Exhibit.

The first "The Only Easy Day... Was Yesterday" Exhibit.

The second "The Only Easy Day... Was Yesterday" Exhibit.

The player starts out with a basic M9, but all of the weapons along with multiple types of attachments in the game are present in this "level" - in the display cases and also seen being held by the characters. There are also two weapons, an M1911 and the W1200, that are exclusive to Museum.

These weapons are found with or without attachments. Many of the weapons showcased retain the attachments they originally had when found in the campaign.

Simon "Ghost" Riley, hunting the player after the red "Do NOT Press" button in his room has been pressed.

The red button on the first room. 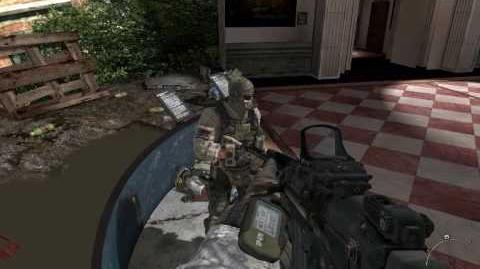