"Hidden ghost town on an abandoned island. Give no quarter to your enemies in close engagements."
— Description

Mutiny is a map in Call of Duty: Ghosts. It is featured in the Invasion DLC. The map is located on and around a flagship.

"Mutiny transports players to a remote Caribbean island harboring an eerie pirate hideout complete with abandoned trading posts and prison cells. Speed and stealth are a must as players navigate the narrow and intertwining pathways. However, let ye be warned that gamers taking up positions on the pirate ship moored in the center of the map will become vulnerable to enemy fire from the numerous flanking routes created by the map’s horseshoe shaped dock. Players that unlock “Mutiny’s” Field Order will find themselves escorted by two ethereal ghost pirates, who will happily send enemy combatants down to Davey Jones’ locker on their behalf. The other Field Order calls in a friendly ship to rain down cannon fire upon your enemies from the sea."
— Official Description

The map is mostly close-medium range. The only real place that would have any long range use would be when on top of the ship, but even then it really isn't long range. Submachine guns and shotguns do well on the map due to it mostly being close-quarters, but in certain spots assault rifles can be used effectively too.

Go to the pirate ship in the middle of the map, prone on the deck and look down inside, the Extinction Egg is held in the cargo bay.

A view of the Mutiny map 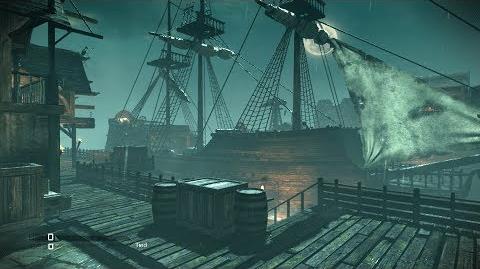