In Der Eisendrache, the one must be erased.

My Brother's Keeper is a hidden trophy/achievement in the Zombies mode map Der Eisendrache that appears in Call of Duty: Black Ops III. It is the main easter egg of the map, and it requires the Primis crew to "erase" Ultimis "Tank" Dempsey. This also requires to continue on with Richtofen's plan, purging Group 935 and Groph, as well as blowing up Griffin Station and the Moon. It is possible to complete this easter egg with any number of players, including solo.

Before starting the easter egg, at least one Wrath of the Ancients bow must be upgraded.

Throughout the course of the easter egg, the following will be required:

Return to the Undercroft area and return your upgraded bow to its box, retrieve the original Wrath of the Ancients from the Tomb. Now, go to the teleporter room and shoot each of the beacons/rods at the top of the teleporter. The player needs to shoot each one so that its end turns orange. Once the player lights them all up, the orange glow will disappear, the sound of a Margwa growling is heard, and the player will be able to move on to the next step.

Around the map there will be a set of eight specific objects that could possibly be sparking. Only one object will be sparking at a time and the player will hear a Margwa growl before it starts to spark. Shoot the sparking object with any upgraded bow and it will stop sparking. The player will hear another cue and have to repeat this process a total of four times. If the player takes too long, fires on a location while it is not sparking, or use a non-upgraded bow, will result in an instant failure and play a failure cue, which resets and stops progress on this step until the next round. Below are the locations of the sparking objects.

Keep in mind that after the first try, the process will automatically start at the beginning of each proceeding round until completed. After four sparking objects have been shot, the player will hear a different cue indicating they have completed this step.

Note: All of this step must be completed within the same round. If the step is failed at any point, they can redo step 2 and restart this step on any following round.

Return to the teleporter and the bottom light will have turned purple. All players in the game must enter in order to teleport.

Once the group teleports, they will now be in the same lab in the past. Here, the player cannot use their weapons or equipment. Dr. Groph will be here talking to Richtofen over radio and accessing his safe. Here the player must do three things before they are teleported back:

After a while, the group is teleported back to the present at the rocket site, where a Panzersoldat will appear regardless of the round (except on the PS3 and Xbox 360 versions). It will appear each time travel throughout the easter egg. It might not appear if the rocket test fire takes place, or has just finished as the players arrive, however.

Interact with the Death Ray on the side facing the clock tower to add a fuse to the side, then go to the other side and pull the lever to switch the Death Ray from "Destroy" to "Protect".

The Death Ray must have been turned on at least once in the game in order to proceed. Head to the terminal near the clock tower and enter the three symbols from the safe the player memorized in order from top-to-bottom. This will open the safe in the lab across from the teleporter. If the code is input incorrectly, steps 2 and 3 must be redone. Head to the safe and interact with it to pick up two fuses and a key card.

Return to the Death Ray and insert each fuse into the Tesla coils on either side of the Death Ray where only two electric currents run up its side, then return the Death Ray to "Destroy" mode (no activation is required). Head to a terminal either outside of the clock tower, or on the rocket pad, and interact with it. This activates the memory game, in co-op, hellhounds will spawn endlessly until the game is completed.

Four symbols on the bottom screens will show for a few seconds before disappearing. Memorize the symbols' locations, or screenshot them for reference. The top screen will then show one of the symbols and the player must interact with the screen correlated to that symbol. Do this a number of times until the machine shuts down and the player hears a success cue.

Proceed to the other terminal and repeat the game. If the player fails the game they can instantly restart the game by interacting with it again. Note that failing the game on the second terminal will require replaying the game on both terminals.

The orbs atop the Tesla Coils will now be glowing. Interacting with the green button on the back of the death ray will cause the rocket crash. A rocket will appear and fall across the sky until striking the bell tower, destroying the bell, and landing in the courtyard below. Dr. Groph will express his anger and lock down the cryogenically frozen "Tank" Dempsey with a lightning barrier, prohibiting the player from interacting with it. If they touch the chamber, they will be hurt by electric damage.

Step 6: Getting the MPD from the Moon[edit | edit source]

Next to the crashed pod, opposite the Mystery Box spawn, there is a Vril Generator sitting in the snow, pick it up.

The player will need to teleport back in time again to find an item they could not access before, by reenacting step 2; every round after the initial teleport will play a Margwa sound at the beginning signaling a spark has spawned.

Once in the past again, hold the use button on the computer to the left of the Kronorium, on the right side of the room. A case near the doorway will open, revealing a stone tablet with the Keeper symbol etched into it. Pick it up with the use button and wait to teleport back.

In the room where you obtain the Wrath of the Ancients, place the Vril Generator in the slot on the tomb, causing a ghostly Keeper to rise out of the tomb. He will start traveling the map and stop at four separate locations in a random order:

For this part, each player should have an upgraded bow (or more specifically, have at least as many bows upgraded as there are players, as mentioned in the prerequisites).

A white circle will appear at the location the Keeper stops at. When you stand inside the circle, there will be a colored tint around the screen correlating to the color of a specific bow:

The player needs to get kills with the indicated bow whilst standing in the white circle. The more players that stand within the circle, the wider the circle's radius will become. Getting kills with the correct bow will transfer souls into the tablet, and once full, the ghost will move to the next location and repeat the process. The zombies do not have to be within the circle.

After this is done four times, the ghostly Keeper will become corporeal, as they appear in Shadows of Evil. It will travel to the Undercroft and teleport to the Moon, and after a brief audio cut-scene during which all zombies despawn, the Keeper will teleport the MPD from the Moon. The MPD has blue canisters in three corners. Place the soul canister the player picked up from the lab in step 3 into the corner of the MPD that is empty, opening it, revealing the same Keeper who has now been corrupted.

Once everyone is ready to trigger the boss fight, Each player must place their Ragnarok DG-4 using its trap function on one of the blue tiles used to activate no gravity. The player will then be teleported into the boss room.

The arena is a dark, circular room, with pillars circling the middle. Here the player will face the gigantic corrupted Keeper. The boss fight has five phases:

The Keeper will currently have four attacks that mirror all four Ancient Bow abilities. The attacks are as follows:

The shock-wave attack is important as it gives the player an opportunity to damage the Keeper. Before the shock-wave is unleashed, the player will see a ball of electricity appear beneath the Keeper in the center of the room. As soon as the player sees this electric ball, they will need to run inside of the electric ball and place down their Ragnarok DG-4 as a trap and proceed to cover. Doing this correctly will plant the Keeper in the center of the room, and expose his weak spot, the rend on its chest. The player now needs to shoot the rend to damage the Keeper. Once the rend ceases to glow, the boss can no longer be damaged.

The player needs to keep repeating this and, once done enough times, a Max Ammo will spawn in the center of the room, initiating the start of the next phase.

The Keeper boss will disappear, and after a short while, multiple Panzersoldats will spawn around the room along with Skeletons. For this phase, the player simply needs to keep killing the Panzersoldats. The first Panzersoldat that is killed here will drop a Max Ammo upon death. Eventually, another Max Ammo will appear in the center of the room and the Keeper will begin speaking. He will reappear after a few seconds. This indicates the start of the next phase.

Phase 3 is a repeat of Phase 1, with the addition of Hellhounds spawning. Repeat the same process as Phase 1. Kill the skeletons and Hellhounds that spawn if you need to recharge your Ragnarok DG-4.

Phase 4 is a repeat of Phase 2. It will consist of Panzersoldats and skeletons.

Phase 5 is a repeat of Phase 1 and Phase 3. In co-op, a Panzersoldat will also spawn in each time the Keeper is about to unleash its electric shock-wave. Repeat the process as in Phases 1 and Phase 3 until the Keeper lets out one final scream, then spin around, signaling its defeat.

After defeating the Keeper, the player will be teleported back to the MPD. Here, Dr. Groph will express his extreme anger at the group and vows to destroy them and even going as far to state he will destroy the entire castle if he has to. On one side of the MPD, the player will see a glowing blue circle with the shape of the Vril Generator from earlier. Press the use button on the circle and the Summoning Key will appear. Pick it up after a few seconds.

Richtofen will explain that the player needs to charge the key in order to free the test subject. Take the key to the terminal outside the Clock Tower and interact with the terminal. The Key will float above the terminal and begin spewing out electricity violently. All zombies will despawn for the following cut-scene where Der Eisendraches rockets will be launched toward the Moon, in-turn causing its destruction, killing Groph and any other Group 935 members at Griffin Station. A cut-scene will then play.

Afterwards, all players are given all of the perks on the map (Quick Revive, Juggernog, Double Tap II, Speed Cola, Mule Kick, Electric Cherry, Widow's Wine, Stamin-Up, and Deadshot Daiquiri) and are given a brief period of damage immunity. This will also cause the achievement/trophy to unlock for all players who completed the steps. It will also give a bonus 2500 XP (for which the reward title is "Frozen Freedom") and a Gateworm icon on the map selection screen.

Der Eisendrache ending cutscene
Add a photo to this gallery 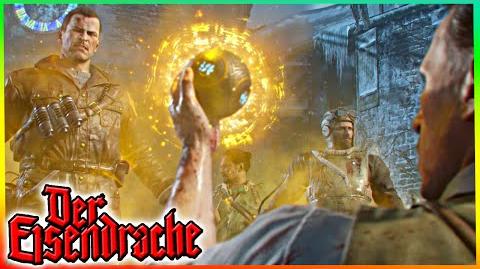 Retrieved from "https://callofduty.fandom.com/wiki/My_Brother%27s_Keeper?oldid=2508279"
Community content is available under CC-BY-SA unless otherwise noted.