Not to be confused with the Sticky Bomb.
For a similar grenade, see Semtex.

The ST74 grenade first appears in the level Mission: Matmata. It has the same blast radius as a normal hand grenade, but does more damage and is often used by Carlyle to destroy the German Panzer IVs on the way to the petrol depot.

The N° 74 ST appears exclusively in multiplayer, where it is assigned to the Light Assault and Anti-Armor classes. Sticky grenades are best used against vehicles. A single sticky grenade has the capability to destroy a tank if it sticks to it. They are less powerful against infantry.

The Sticky Grenade lives up to its name. Though it is primarily meant for anti-tank uses, it can stick to walls, ceilings, and even players. It is not as effective as fragmentation grenades due to its relatively smaller blast radius, but once stuck to a player, it is only a matter of seconds for certain death, as these grenades cannot be thrown back.

Sticky Grenades can make good improvised mines for covering a retreat. If the player sees the enemy coming their way and they don't have the right weapon to take them out, consider tossing a Sticky Grenade on the floor, in the nearest doorway, on a barrel, or anywhere where it might be hard to spot. With good timing and a bit of luck, it can save the player's life more often than Fragmentation Grenades, which have a tendency to bounce around, make a distinct "ping" noise, besides having a longer fuse. However, the sticky grenade makes a faint "thok" noise when it sticks onto something and cannot be thrown as far. The player cannot cook this grenade, therefore, the player can run around with it until it is thrown.

A much more rare but effective tactic is to throw a sticky grenade at an ally, then have them run into an area with lots of enemies before it explodes. This is not recommended for hardcore, as said ally will die in the process due to friendly fire activated. Because the player can throw Sticky Grenades quite quickly, the Primary Grenades x2 perk (don't forget the perk Fireworks, either) is handy for throwing both quickly for a larger blast and greater damage.

Due to the fact of being known as an Anti-Tank grenade, some players will think of the Sticky as much more powerful than regular Fragmentation Grenades and will tend to equip it in all their custom classes. Do not make this mistake. Although they are Anti-Tank weapons, the blast radius and damage (against infantry) of a Sticky Grenade is actually less than that of a Fragmentation grenade, so even though the Sticky is a far better choice when attacking Tanks, it is a less powerful choice against infantry. Furthermore, the sticky effect might become annoying if a grenade is intended to bounce off a wall into an enemy stronghold. To solve this problem, vary between Fragmentation grenades and Stickies during intermission time, if the player thinks the map and circumstances are suitable or not for either one. Without a doubt, the Sticky grenade is the grenade of choice for tackling Tanks, but even then, one would do better if using a Bazooka or Satchel Charges as these will do the most damage to a tank.

Render of the model 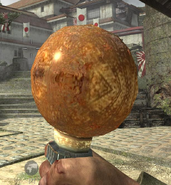 "Plastic explosive device that sticks to targets before detonating. Device designed as an anti-tank grenade."
— Description

"A grenade that sticks to surfaces before detonating."
— In-game description

The N°74 ST returns in Call of Duty: Vanguard as the Sticky Bomb. It was added as part of the Season Two content for the game.