"The Disruptor was designed to neutralize the Ancestors' telekinetic fields."
— "Godfather" Castle, when the player picks up the Schematics for the NX-1 Disruptor.

The NX-1 Disruptor is a weapon in Exodus for the Nemesis DLC in Call of Duty: Ghosts.

It is a schematic weapon that can be found after getting through the first section of the map. After finding the appropriate crafting items from the toolboxes, it can be crafted and be obtained as a free third weapon, much like the Venom-X series of weapons from previous titles. It comes with 10 rounds, but no reserve ammunition. If the player using the NX-1 Disruptor has the Limited Ammo relic active, the NX-1 Disruptor will only hold five shots instead, and again with no reserve ammunition.

Pressing and/or holding the fire button fires one Disruptor shot, and these shots are so powerful it can take out a Rhino in about four shots, whilst killing Scouts, Seekers, Hunters, Scorpions, Bombers, and the Leper in one well-aimed shot. These shots do have a slow projectile speed, so it is ill advised to attempt to shoot mobile Cryptids from afar, as the Cryptids will tend to easily dodge the shots. NX-1 Disruptor shots have some splash radius to them, so the player does not need to hit a Cryptid directly with an NX-1 Disruptor shot to deal damage to, or even kill, a Cryptid.

If the NX-1 Disruptor is holding its maximum ammo capacity, the reticle for the NX-1 Disruptor will turn yellow instead of its usual white. When the NX-1 Disruptor is in this state, this allows for a charge shot to be performed. Pressing and holding the aim down sight button will charge and eventually fire a very large, powerful, slow-moving NX-1 Disruptor round which upon making contact with a surface or enemy, the ball of energy will disperse, killing weaker Cryptids, and damaging tougher cryptids. This charge shot has a much larger splash radius to it and is far more powerful. However, the round's larger size can make it easier to inadvertantly strike a surface or wall that will cause the charged shot to disperse prematurely.

The NX-1 Disruptor is intended to be the main counter-measure against an Ancestor, as the charge shots will drop the shield of an Ancestor prematurely. The charge shots, and the NX-1 Grenades, are the only ways to prematurely drop an Ancestor's shield. Otherwise, all that the player can do is simply wait for the Ancestor to voluntarily drop its shield to allow for attack. The utility of the NX-1 Disruptor against heavy opponents and Ancestors, in combination to its limited sustained usage capability, makes it a situational weapon that should ideally only be used when the situation calls for it. Against basic enemies like scouts, hunters, and scorpions, the NX-1 Disruptor should ideally only be used in cases of emergency, such as if the player runs out of ammo or is threatened while reloading a weapon with a slow reload speed. This will allow the NX-1 Disruptor to be ready to fire a charge shot when the situation calls for it.

The NX-1 Disruptor holds no reserve ammunition because it recharges ammo on its own, one shot at a time. However, one should be mindful about spamming it, as shooting it to the point where it's dry of ammunition can hard press a player waiting for it to recharge. Because the NX-1 Disruptor recharges rounds somewhat slowly, the NX-1 Disruptor cannot be used for extensive periods of time as a weapon against regular Cryptids.

The NX-1 Disruptor in first person. 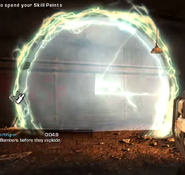