The NX ShadowClaw (formerly NX Phantom) is a compact crossbow that appears in Call of Duty: Black Ops III. It was added in the February 8th, 2016 update. It is only obtainable through Supply Drops in Multiplayer or in the Mystery Box on the Zombies map Gorod Krovi.

The NX ShadowClaw is a secondary weapon under the Special category. It has a six-bolt magazine. A single bolt can achieve a one-hit kill and be retrieved if it lands within the playing field.

The NX ShadowClaw is unique in a very large amount of ways. While it is an instant kill weapon, the bolts it fires are not hitscan, and travel reasonably slowly, so leading the target (especially in mid-long range) is necessary. Furthermore, the bolts arc over distances, so aiming above the target is required at mid range and beyond. Aiming down sights with this weapon is ill advised because there is no benefit whatsoever from doing so. Due to the low reserve ammunition, use with Scavenger is advised.

As one final trait, the NX ShadowClaw is always functionally Silenced, and firing it will not reveal the user's location on the map. However, it is not completely silent. Despite a lack of presence on an enemy's radar, repetitive fire produces a very noticeable high-pitched whistling from the arrows traveling through the air, easily giving away a position, or the fact that the weapon is being used.

For attachments, the NX ShadowClaw is not a good candidate for any optic as there is no functional advantage to aiming down sights. Tri-Bolt works well at close-mid range, as it can be used like a shotgun, but is incredibly inefficient of ammo capacity. The Bayonet also works well at close range, allowing the player to close in for a one-hit melee kill if they can't hit their target.

Where the ShadowClaw really shines is with Dual Wield, where it can launch the bolts rapidly. It should be noted that firing both weapons simultaneously will result in the two bolts impacting in exactly the same place, meaning one of the bolts is wasted. To increase the chances of hitting, a short gap should be left between firing one crossbow and the other.

The NX ShadowClaw appears in the Mystery Box on the Zombies map Gorod Krovi in dual wield form. It appeared to be explosive in the trailer, but it was only being used against exploding fire zombies, similar to the ones seen on Tranzit, Origins, and Der Eisendrache. Instead of firing explosive rounds like expected, it fires bolts similar to multiplayer. Unlike its multiplayer counterpart, its bolts cannot be retrieved. It has 6 bolts in each magazine and starts with 120 spare ammunition and receives 126 with a Max Ammo. It has low damage and does not have a very fast reload animation, but has almost pinpoint hip-fire accuracy.

When upgraded, it is called the Apollo's Fervor and has 12 bolts per magazine with initially 144 in reserve and 156 with a Max Ammo. Although the weapon is often dismissed as one of the worst weapons on the map, doing very little damage to enemies, it does deal high headshot damage and is capable of reviving downed players instantly when upgraded much like the Ballistic Knife or Sekhmet's Vigor. The Apollo's Fervor is by far the most effective method of reviving teammates (other than Phoenix Up or Near Death Experience) due to its significantly higher ammo and multiple shots in 2 separate magazines compared to the other two instant revive weapons with single shot magazines and low ammo. The weapon may be best used as a "designated medic weapon" rather than an actual zombie-slaying weapon, and is a great choice as a tertiary weapon for Mule Kick when going into the boss fight for Love and War.

For some reason, possibly due to the community's expectation for an explosive crossbow, the Apollo's Fervor now causes a mini explosion effect randomly upon impact that seems to do slightly more damage to the zombies when triggered. It is supposedly random when the mini explosion will activate, and happens nearly every shot.

First-person view of the NX ShadowClaw 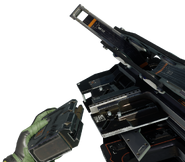