For another variant, see DIY 11 Renovator.

The Nail Gun is a "submachine gun" with a slow rate of fire offset by a high damage-per-round and low recoil. The 'special weapons' required to unlock the Nail Gun consist of the M79, Ballistic Knife, and R1 Shadowhunter.

The Nail Gun can be brought into any map via Create-A-Class, at Loadout rarity. When upgraded via the Pack-a-Punch Machine, it becomes the Redecorator gaining an increased magazine size of 90 and maximum reserve ammo of 360 alongside increased damage per Pack-a-Punch tier.

The Nail Gun in first person. 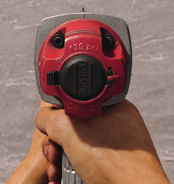