The Nambu reloads quickly and has unobstructed sights. It has the shortest mid-magazine reload delay, and the second shortest reload delay when out of ammunition. These advantages can be useful. However, users should note that the point of impact will land directly on the left corner of the right rear sight.

The Nambu goes mainly unseen and unused. It is the first obtainable weapon in the game, given to Pvt. Miller by Sgt. Sullivan after he is rescued from the Japanese camp in "Semper Fi", but subsequently it is rarely seen unless a Japanese soldier goes into Last Stand. The Nambu is a reasonable back-up weapon, but there are many weapons to pick up throughout the campaign which are more useful as a secondary.

The Nambu is unlocked very early on in multiplayer. It is just as powerful as the M1911, Tokarev TT-33 and Walther P38. However, its main advantage is its medium penetration (similarly to the .357 Magnum), unlike these three pistols, which have low penetration. It has low recoil, fast reloads, and what are generally considered good sights. The sights, however, are slightly "off", as the point of impact is off center: instead of the at the top of the front sight post, it is slightly to the right of it. Like the other non-Magnum pistols, it has a capacity of 8 bullets. 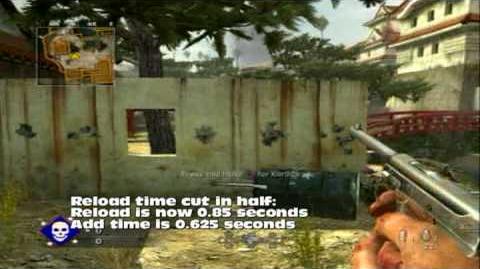 The Nambu is only found in multiplayer, when the Japanese faction is chosen. It's essentially the same as the TT-33 and Luger, beating both the M1911 and Webley in ammunition capacity. It has a very similar reload to that of the Luger, and the same recoil and ammo capacity of the Luger and the TT-33. It has no firecap, and its decent damage and low recoil make it a very good secondary for close quarters or back up if caught in the middle of reloading.