Call of Duty Wiki
Register
Don't have an account?
Sign In
Advertisement
in: Call of Duty: Infinite Warfare Tactical Equipment

The Nano Shot (known as the Adrenaline Drip pre-release) is a Fujiwara tactical equipment featured in Call of Duty: Infinite Warfare.

The Nano Shot increases health regeneration, this allows players to heal faster during combat. Its effects also stay for five seconds after the player's health is fully regenerated, making any type of damage not hurt the player, except for environmental damage like, falling off the map. This can help when players need to quickly re-engage enemies and groups of them.

The Nano Shot is the only way to heal the player when playing the campaign on Specialist difficulty. 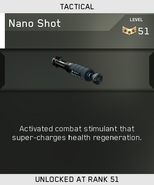