For the predecessors, see Fire Bomb and Blast Furnace.

Napalm Burst is an Ammo Mod in Call of Duty: Black Ops Cold War, it can be applied to any weapon for 2000 essence at the Pack-A-Punch Machine.

"Bullets deal fire damage. Each bullet has a chance to apply a burn effect on normal enemies dealing 10% of their maximum health in fire damage over 5 seconds (3 second cooldown).."
— In-game description

Napalm Burst can be equipped on any weapon at the Pack-A-Punch for 2000 essence or activated by Elemental Pop. Every bullet fired from a weapon with Napalm Burst equipped has a chance to set a zombie on fire, dealing 5% of their maximum health (if upgraded to Tier 1) and continuous fire damage for 5 seconds equaling 10% of their maximum health. The Ammo Mod will then enter a 3 second cooldown before usable again. This effect can activate on all type of zombies, including Elites by upgrading Napalm Burst to tier IV using Aetherium Crystals.

Any weapon equipped with Napalm Burst will receive a 1.5x damage multiplier against Plaguehounds and Manglers.

Without any level requirement, players can upgrade Napalm Burst's effects with the use of Aetherium Crystals.

A zombie under the effect of Napalm Burst

Icon showing the current weapon is equipped with Napalm Burst. 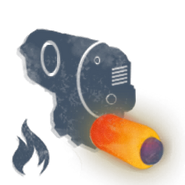 The Napalm Burst icon within the Pack-a-Punch Machine menu.
Community content is available under CC-BY-SA unless otherwise noted.
Advertisement