For a similar type of Zombie, see Catalyst.

For other uses, see Zombie.

Napalm Zombies, also known as Infernos in Call of Duty: Mobile, are a variant of zombies that are featured in the Zombies maps Shangri-La, Green Run, Origins, Dead Ops Arcade 2: Cyber's Avengening, Der Eisendrache, Gorod Krovi, Tag der Toten and throughout the Nightmares campaign. They take the appearance of a humanoid zombie, but look burnt and have a flaming aura. In Green Run, Origins, Der Eisendrache and Gorod Krovi, they take the appearance of a normal zombie, but they are mostly on fire. Both versions of Napalm Zombies appear in the Mobile version of Green Run.

When the Napalm Zombie spawns in Shangri-La, it emerges from a patch of flames that spawns on the ground. Napalm Zombies have a higher damage threshold and take significantly more bullets to dispose of than normal zombies. Napalm Zombies explode violently upon death, leaving behind a small patch of napalm that will harm players and zombies if touched. This can be used to the player's advantage. A player can run up to the Napalm Zombie and back up quickly while in a narrow chokepoint that many zombies go through. The Napalm Zombie will explode with minimal damage to the player(s) while killing all zombies that go through the fire. When a player is near a Napalm Zombie, the outer edges of their screen will turn orange, the same way it does when walking through a fire trap in Kino der Toten or Ascension. The character that player controls will warn him/her if the Napalm Zombie is about to damage the player. If a player is too close to a Napalm Zombie, it will explode and can kill the player even if they have Juggernog if they are close enough.

In any of the Green Run maps, Napalm Zombies are created when these go through lava, causing them to ignite on fire. Although similar, they are not exactly the same, as they still have the same health as a regular zombie and will only explode upon death.

In Origins, they are created once a normal Zombie is burnt by a Panzersoldat's flamethrower. Zombies can also get burned by the Mark IV Tank.

In Nightmares mode, they spawn with every other zombie and use the same skin as the others, the only difference being that they're engulfed in flames. Their mannerisms are similar to those of a normal zombie although their sprinting is noticeably faster. Like in Shangri-La, the Napalm Zombie may go close to the player, causing it to explode, killing any other zombie in its vicinity, pontentially harming the player and leaving a small patch of fire for a short amount of time.

In Der Eisendrache, several Napalm Zombies appear when the player is holding out in the rocket tunnel when trying to obtain a piece of the Ragnarok DG-4. They can also be created if a Panzersoldat burns a zombie with its flamethrower, just like in Origins. Killing a Napalm Zombie is required for the achievement None Left Standing.

In Gorod Krovi, Napalm Zombies are created when a Dragon breaths fire on them. A possible trial for the player is to headshot ten Napalm Zombies. It is also required to kill several Napalm Zombies in order to obtain the Gauntlet of Siegfried after bathing the Dragon Egg in fire.

A Napalm Zombie in the Shangri-La Trailer.

Another photo of the Napalm Zombie.

A Napalm Zombie seen exploding in the background. 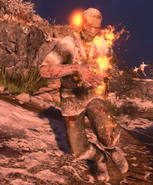 A Napalm zombie in Tag der Toten, as seen in Call of Duty: Black Ops 4. 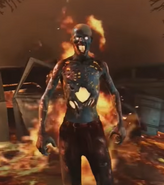 The "Inferno" in Call of Duty: Mobile