Call of Duty Wiki
Register
Don't have an account?
Sign In
Advertisement
in: Countries, History, Locations,
and 14 more

This article is about the World War II-era country. For the modern day country, see Germany.

The Greater German Reich, also known as Nazi Germany or simply the Third Reich, was the name of Germany during the period from 30 January 1933 to 8 May 1945 and a totalitarian nation on Europe, when the Nazi Party was the primary and single political and governmental party in Germany, led by the dictator Adolf Hitler. They are main antagonists in the World War II Call of Duty games. 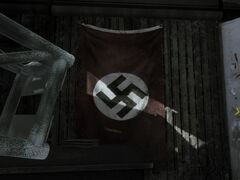 In the first half of the Call of Duty series, the German military is the first and only enemy encountered. Exceptions include Call of Duty 2: Big Red One, where the player sometimes encounters Italian and Vichy French units. One of Call of Duty: World at War's two campaigns, when you play as an American fighting the Japanese, and Varied German forces, ranging from standard units of the Heer (army), to Fallschirmjäger (paratrooper) units, and Waffen-SS (armed protective squadron) are the enemy in Call of Duty 1, 2 and 3. These enemies range from simple infantry on foot, to tanks and aircraft in certain stages. In Multiplayer, it typically consists of one team playing as an Allied force (American, Canadian, Soviet, British, etc.) against the Germans.

Last remnants of the Nazis after World War II serve as a backdrop and focal point in Call of Duty: Black Ops for the development of Nova-6, a bio-chemical weapon intended to kill soldiers within a minute and cause their bodies to rot. They only appear in "Project Nova", where the player goes through the level as Viktor Reznov, as he, Dimitri Petrenko, and other Russian soldiers embark to infiltrate one of their remaining camps on October 29, 1945. The point of this mission was to take the weapon and its creator back to Russia. Additionally, after the fall of Berlin, Hermann Freisinger attempts to rebuild the Nazi forces as the Fourth Reich under Project Phoenix. As a result, Task Force Vanguard is formed to stop him.