"Escape your captors and save as many hostages as possible."
— Level Description

The mission starts with different points of views depending on which player, if playing in co-op.

The First player, along with some hostages will be held captive by two Russian Commandos, the player needs to go up to the soldier standing by the door and take the Desert Eagle in his holster by holding the "use" button. The commandos will react to it, so the player needs to quickly kill them. The player can pick up the AK-47 dropped by the soldiers. Hostages in another building will also be executed, this building also holds the second player if playing on Co-op. The player then needs to head to that building and breach it (before the second player is executed on Co-op). After killing all the commandos, the gameplay will go to both players' point of view. This gameplay is also done on Single Player.

The Second Player, along with some hostages are also being held captive by five Russian Commandos. This player will be unable to do anything, while watching hostages being executed by a Russian soldier. The First Player will breach a door and the Russian soldier that is executing the hostages will be killed and his Desert Eagle will fly out of his hand. The Player needs to press and hold the "use" button to catch the gun. After receiving the Desert Eagle, the player can use it to help their partner and kill the remaining soldiers. After that, the gameplay will go to both players' point of view. This gameplay is only done on Co-op.

Both players' Point of View

The now reunited player(s) must fight their way to reach and defuse a bomb. As the players breach and fight through the streets, multiple civilians can be seen. When the player reaches a courtyard and breaches it, there is a bomb to be defused. Afterwards, the player(s) breach a final room, kill three commandos and end the mission successfully.

) - Complete the Special Ops mission Negotiator on any difficulty.

) - Rescue all the hostages in the Special Ops mission Negotiator. 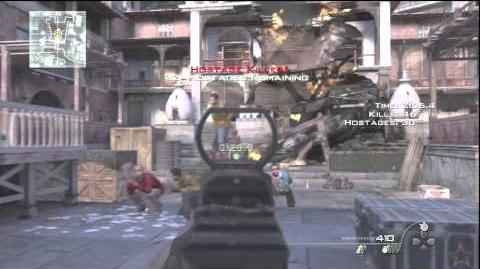