"Night Drop" is the third mission in Call of Duty 3. In this chapter, the player takes control of Sgt. Doyle, a member of the British SAS who is accompanied by Corporal Keith, Major Ingram and the French Resistance.

The mission takes place on 22 July 1944. Doyle, Keith and Ingram travel from Dorset to France in a Halifax Bomber. On board of the bomber are two jeeps, nicknamed Vera and Lynn. They are parachuted out along with the crew of the bomber and the SAS members when the bomber is shot down. Doyle lands outside a barn and is knocked unconscious when hitting the ground. When he wakes up, he finds a German soldier killing a fellow SAS soldier (possibly Wilkins) with a MP-40, and then heading towards him before being shot down by Pierre LaRoche. LaRoche and Doyle head into the barn to find other members of the French Resistance along with Cpl. Keith and Maj. Ingram.

They head out towards a nearby house trying not to alert German soldiers. after a small battle, Doyle, Keith and LaRoche find Vera behind a barn and drive to the manor with several vehicles and infantry behind shooting them. At the manor, Doyle and Keith meet Isabelle DuFontaine, yet another member of the French Resistance. LaRoche stays with the jeeps to look out for Maj. Ingram who didn't yet arrive while Doyle, Keith and DuFontaine move out to destroy the Flak Guns the left route and find Marcel the right hand route. As soon as Doyle enters a house, he soons finds himself grappling a German, but kills him quickly. After finding Marcel and destroying the flakguns "the bastards who shot us from the sky sounds like payback eh Doyle" as Keith puts it, Ingram arrives in Lynn and takes Marcel and DuFontaine to the rendezvous point while Doyle takes Keith and LaRoche in Vera. The player (who is now driving) gets ambushed and escapes through a train station and over a damaged bridge the player then gets stuck in a ditch leading to them being saved by a bazooka wielding Marcel.

Keith: Doyle! You listenin' to me, Doyle?! So, as I was sayin', the only two things the Frenchies are any good at; surrendering, an' kissin'. 'M I boring ya Sergeant?

Keith: How are ya Beattie? Skyvin' as usual? 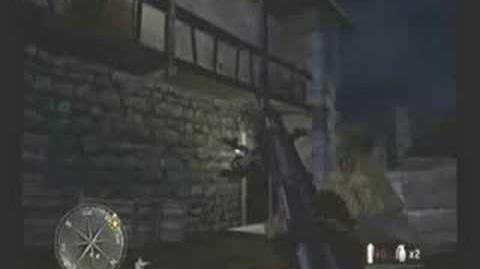 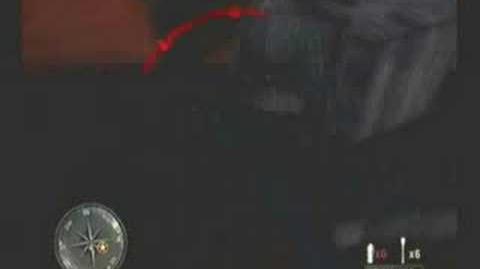 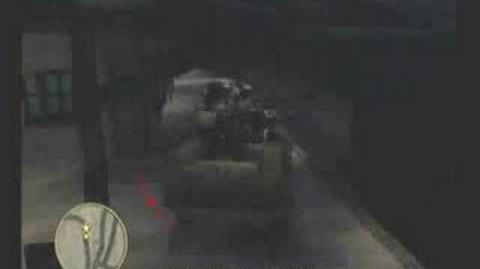 Call of Duty 3 - Mission 3 -- Night Drop (Part 3 of 3)
Add a photo to this gallery
Retrieved from "https://callofduty.fandom.com/wiki/Night_Drop?oldid=2477010"
Community content is available under CC-BY-SA unless otherwise noted.