For a similar piece of equipment, see Thermal Vision Goggles.

Night Vision Goggles are a usable equipment that allow the player to see in little to no light.

AN/PVS-7B night vision goggles are available to the player in many levels of the campaign, and are always available in multiplayer.

During the campaign, they can be used in conjunction with the AN/PEQ-2A laser to see a visible path a bullet will take, which can help with accuracy in some situations. However, this will not work to predict the path of a second bullet fired from the hip will take due to recoil. These may still fly anywhere within the crosshairs.

Using these devices in a dark environment gives a great advantage over opposition, although they can be bulky and cut down peripheral vision. Light flashes from firearms and flares are more powerful and disorientating. They are only particularly useful twice in the campaign: once in the mission "Blackout", in the house where the player rescues Nikolai, and once in the mission "The Bog", during the fight in the first building.

Night Vision is also available in multiplayer, but there are not many areas where it is needed. It may have some use on the maps Wet Work or Bloc, or in the dark hallways of Vacant if the player's television's or PC brightness and contrast settings are too low.

In broad daylight, it becomes almost impossible to see anything becuase everything on the player's screen is bright green and white, and everything is also very shiny in this state.

The Night Vision Goggles in "Blackout".

Night vision goggles make their return, but are not used often in the campaign and not at all in multiplayer. It seems to have much more contrast, the lit areas glowing profusely, making it especially hard to look at. The only time that they are a major use is in "The Gulag", when night vision is needed to infiltrate the dark bottom cells until they find light again. It's seen again in "Just Like Old Times", only being useful for a few engagement with Shadow Company in the caves, but its use isn't particularly needed. Night vision goggles can also be used in the Special Ops mission Overwatch, but they are not particularly useful. In multiplayer, they have completely disappeared, probably because of the introduction of the Thermal Scope being so useful in dark areas and when smoked, with the fact there are no dark maps in-game.

The Night Vision Goggles in "Just Like Old Times".

The night vision goggles available in the Prestige Edition of Modern Warfare 2.

Night Vision goggles are available in the mission "Stronghold", where they are used at the beginning of the level and near the middle. At the beginning, they are worn by Yuri and Price while they parachute into the Castle grounds, they are then immediately taken off once they get to the ground. They are put on again in the dungeons of the castle, where they are used to navigate the powerless corridors, until the enemies start using flares, when they are taken off once again. The player can put them on and off at will, but that is not advised in light areas. The Night Vision goggles are also available to Yuri in "Down the Rabbit Hole".

The Night Vision Goggles appear in the Call of Duty: Black Ops: Declassified mission Active Measures, and are activated by pressing the right arrow key on the D-pad. Alex Mason must use them to see in the dark throughout the mission. Choosing not to use them will grant the player the Not Afraid of the Dark trophy.

Night vision goggles only appear as part of the players' loadout in the level Clockwork, and are only useable once the Ghosts enter objective "Blackbird" and are automatically disabled as the team moves towards "the nest".

As usable equipment in the players' inventory, night vision goggles are unavailable. 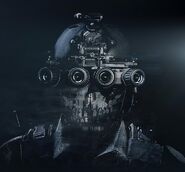 Night Vision Goggles are used in the mission "Armada".

The effects of Night Vision.

Night Vision Goggles return in Call of Duty: Modern Warfare. They are first seen very prominently in the first reveal trailer, being used by Captain Price and several SAS operatives.

Compared to past iterations of nightvision goggles in past Call of Duty games, utilizing NVGs in Modern Warfare prevents the player from using their iron sights or optics with most weapons; instead, the weapon is canted to the left and an IR laser is used to indicate the players' point of aim. Additionally, with the implementation of an infrared spectrum, Modern Warfare no longer uses a tinted overlay to display night vision.[1]

Night Vision Goggles are a part of the players' loadout in the missions Clean House, The Wolf's Den while playing as Kyle Garrick, and Going Dark.

Interestingly, almost every friendly NPC in the levels set at night are seen with night vision goggles.

While not appearing as standalone equipment in Modern Warfare's multiplayer, a dedicated nighttime map rotation playlist is available in the multiplayer. Here, the night vision goggles are a permanent part of the players' loadout. On night maps, all weapons are automatically equipped with a laser sight, as optics and iron sights cannot be used on weapons. If all 5 attachment slots on a gun are full, one has to be removed in order to make way for a laser sight.

Various operators in Modern Warfare's multiplayer feature night vision goggles as part of their kit; this does not actually allow the players to use NVGs outside of the nighttime playlists.

Similar to Modern Warfare 2's Prestige Edition, Modern Warfare's Dark Edition includes a fake, abiet somewhat working pair of night vision goggles. Stylistically, they appear to be based off of the GPNVG-18s first seen in the reveal trailer.

They operate similarly to the NVGs seen that were released with MW2, although there are some caveats. Firstly, it is not "true" night vision, in fact it is actually a camera sans the IR light filter that relies on an IR spotlight for illumination; this means that there is not only a capped frame rate, but there is also motion blur and a limited field of view. Secondly, in addition to the limited FOV the image is displayed with a slight fish eye effect, or if the image were to be zoomed out; this inhibits proper depth perception and can be nauseating when used for extended periods of time.[2]

Interestingly, an XRK logo can be seen on the right side of the device.

Promotional screenshot of an SAS operator with panoramic night vision goggles. The brightness of the IR patches under night vision is also apparent.