"In 'Nightfire', players take to the streets of a war-ravaged Berlin with only the flames of the burning city to expose the enemy."
— Level description

Nightfire is a multiplayer map available via the first Call of Duty: World at War map pack which was released on February 11, 2009. It is set in the streets of Berlin with the opposing sides being the Wehrmacht and the Red Army.[1] Fire-bombed Berlin provides the backdrop for “Nightfire", an intense battlefield for mid to large-scale team games. Shelled buildings and ruins of the city provide coverage among the war-ravaged streets, and the flames of the burning city expose the enemy running through the night. Fight for your life knowing that this fiery urban battlefield may soon be your grave. This map is the same as the campaign mission, "Eviction"; the Zombies map, Der Riese is also based on this map. 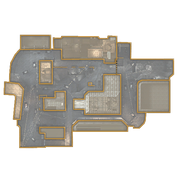 A player in action on Nightfire.