Alex Mason by drowning and choking at the same time

"He has no fear, no conscience, no weakness. This is Nikita Dragovich."
— Robert McNamara

Major General Nikita Dragovich (Russian: Никита Драгович) is the main antagonist of Call of Duty: Black Ops. He was responsible for the death of Dimitri Petrenko and the creation of "Project Nova". Dragovich is also responsible for the numbers program which brainwashed Mason into becoming a sleeper agent. He later conspired with Lev Kravchenko and Friedrich Steiner to weaponize Nova 6 and unleash it upon the United States. To do this, he had many Americans brainwashed as sleeper agents with one of them being Alex Mason.

Dragovich was born on August 10, 1914, in the Russian city of Tsaritsyn (now known as Volgograd) during the final years of the Russian Empire. Nothing else is known about his early life beyond him eventually witnessing the Russian Revolution, the formation of the Soviet Union and enlistment in the Soviet Armed Forces.

The Massacre at Red Square

"Promises of reinforcements were made. Made, but not kept."
— Reznov, telling of Dragovich's "promises".

During the infamous Battle of Stalingrad, General Dragovich would promise to send more reinforcements. General Dragovich abandoned this promise and left Viktor Reznov's men to be massacred at Red Square, with Stalingrad eventually being liberated by the Soviets. It was here that Reznov learned that Dragovich should not be trusted.

The Capture of Steiner

"We are here for one German, and one German only. Doctor Friedrich Steiner."
— Dragovich explaining his plan to get to Steiner.

After the war, Dragovich was in charge of interrogating the German POWs which he learned about the Nazis' failed attempt to use V-2 rockets with Nova 6 warheads to strike the US and the Soviet Union. He along with Lev Kravchenko, his right-hand man, volunteered for the Soviets' Operation Olympus. This operation required them to capture a scientist named Friedrich Steiner and bring him and Nova-6 which was a biochemical weapon that was created by Steiner back to Russia. Dragovich led a group of Russians that are commanded by Captain Viktor Reznov along with Dimitri Petrenko. They were ordered to capture Steiner in a Nazi stronghold in the Arctic Circle. The operation was a success and Steiner was eventually found and taken into Soviet custody while the rest of his men were either killed or later executed by Kravchenko and other Soviet officers.

During the mission, they found and captured Steiner, and discussed Project Nova. When they found the weapon aboard a frozen abbandoned ship, Dragovich decided to test the weapon on Reznov's squad. Petrenko and his men died from the gas, but before Reznov could share the same fate, the British Commandos attacked the site in order to take or destroy the weapon shipment. The shipment was destroyed by Reznov. However, Dragovich escaped with Steiner meaning that the weapon could be recreated. 14 years after, in 1959, Dragovich received the Party approvals for use of Nova 6 in a first strike capacity in the event of World War III.

The Capture of Alex Mason

"He will know suffering beyond his darkest fears. I have plans for you, American."
— Dragovich upon capturing Mason.

During the next 16 years, Dragovich climbed through the ranks of the Red Army and ultimately became one of the most powerful men in the Soviet Union with its entire military seemingly at his disposal. In 1961, Dragovich turned out to be working with Fidel Castro, securing an alliance with the Cuban Government to allow Dragovich to operate within the Cuban borders. During the Bay of Pigs Invasion, Operation 40, a CIA led assassination team was ordered to assassinate Castro. However, the evacuation went awry and Mason was captured by Castro, Dragovich and Kravchenko.

"Wait a few moments...let him rest. When he regains consciousness, double the voltage."
— Dragovich telling Steiner to brainwash Mason.

Later, he brought Mason to Vorkuta which was a Soviet labor camp. While there, Dragovich had Steiner implant Mason with the number sequences to translate the number codes that are necessary to receive instructions as Dragovich's sleeper agent. Dragovich also tried to brainwash Mason to kill the current President of the US, John F. Kennedy. However, that was with little success. He considered the brainwashing of Alex Mason a failure and decided to let Mason rot in Vorkuta, but Reznov who was also an inmate of Vorkuta used his friendship with Mason to sabotage the brainwashing by implanting new targets to kill: Dragovich, Kravchenko and Steiner in revenge for betraying him and killing Petrenko.

About a month after the Vorkuta escape, Dragovich oversaw the launch of two Soyuz rockets as part of the Soviet Space Program which he took Kravchenko with him to watch the project. Operation 40 planted a double agent named Grigori Weaver that was working with the Ascension Group to help out with the infiltration by the X-Ray and Whiskey Teams. Weaver was discovered and Dragovich ordered Kravchenko to "take care of him". Kravchenko stabbed Weaver in the eye with a knife, causing him to lose his eye. X-Ray hunted down and rescued Weaver who despite the injuries that he obtained was able to continue on with the mission. Mason, Woods and Weaver sabotaged Soyuz Two in time and hunted the Ascension Group down. Kravchenko left the base in his private Mi-8 assault helicopter while Dragovich appeared to have tried leaving in his private limousine. Mason's team chased and destroyed the limousine and assumed that he was dead. Mason had the feeling that Dragovich was not present in the limousine which turned out to be correct.

The Second Capture of Mason

"It's been too long, Mason. We must make up for lost time."
— Dragovich after capturing Mason again.

It was discovered by the SOG that Kravchenko was operating in Vietnam and they are told to hunt him down and kill him. A Soviet cargo plane that was thought to contain Nova 6 was shot down by the CIA and a SOG team comprised of Mason, Woods, Bowman and Reznov are ordered to recover it. They reached the wreckage after fighting the enemy resistance only to find out that the Nova 6 dispersed after the crash. They found a map for Dragovich's compound, but the Soviet forces arrived on the ground below. The SOG team battled them, but the team was found by Dragovich and Kravchenko soon after with the result that all of them were captured by the Viet Cong and the Soviet forces.

"Our plan to strike at the very heart of the west is now in motion."
— Dragovich

All of Dragovich's actions were in preparations for an attack on United States with Nova 6, released by and with the brainwashed sleeper agents that he planted across the United States. He controlled them through his numbers station and is ready to release Nova 6 and decimate America under his orders.

"You should have been my finest agent! It would all have been so much simpler..."
— Dragovich before Mason chokes him to death.

In the final mission of the campaign, Mason and Hudson attempted to capture Dragovich in destroying the Rusalka only to find out that the Rusalka was just a surface component. The real numbers station was in a Soviet submarine base. They fought their way into the base at the same time that the attack from the surface was tearing the base apart, causing it to flood and explode bit by bit. After the two split up, Mason finds the broadcast control point on an overhanging platform and prepares to shut it down, but an explosion dislodges him from the platform. Mason grabs onto the edge of the platform just as Dragovich emerges from the smoke. Just when Dragovich moved to execute Mason, Hudson intervened and shot him in the shoulder. While Dragovich was distracted on attempting to kill Hudson, Mason grabbed his arm and pulled him over the edge of the platform, dropping both Dragovich and himself onto the ground as water rose up from below. Mason reprimanded Dragovich for the way that he brainwashed him which resulted in the deaths of his SOG colleagues, Woods and Bowman. After Mason reprimanded him for trying to make him kill John F. Kennedy, Dragovich responded by saying "Tried?". Mason choked him to death under the water, ultimately drowning Dragovich.

Though Dragovich does not appear throughout the past story arc of the campaign, he is mentioned and seen in a cutscene when Woods tells the story about how Alex survived the numbers to his son, David Mason. Dragovich can be seen when Mason was being programmed by Steiner. It was revealed that Reznov was the one who reprogrammed Mason rather than Dragovich.

As an Easter Egg in the mission, Life in Call of Duty: Black Ops III, Reznov's order to Mason of killing Dragovich, Kravchenko and Steiner ("Dragovich, Kravchenko, Steiner. These men must die.") could be seen during the pre-mission scrolling text as NATO phonetic alphabet text.

It is revealed that in an attempt to revive the CIA's MK project, Coalescence Corporation CEO Sebastian Krueger looked into their files about their former agents including Hudson, Mason, Woods, Bowman and Weaver. It eventually led him to learning about Project Nova and all of the leading men of the project including Dragovich.

Dragovich is mentioned in the mission "Echoes of a Cold War" when Perseus is searching for information left behind by Dragovich at the old Yamatau base in the Ural Mountains. His profile can be found when going on the monitor in CIA Safehouse E9. He is also mentioned in the Season Three intro by Vikhor "Stitch" Kuzmin.

Dragovich at the end of "Operation 40" 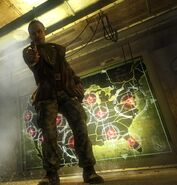 Dragovich with Castro and Kravchenko at a harbor in Cuba

Nikita Dragovich as seen in the CIA Dossier in "U.S.D.D."

Dragovich in the ship containing Nova 6 in "Project Nova"