Egorov applied for selection into Spetsgruppa В or "Vympel" to take part in counter-terrorism operations citing a desire to "fight real evil", referring to Al-Qatala attacks in Urzikstan and abroad. After 18 months, Egorov passed the Vympel selection and was directly deployed into Allegiance's active duty by Sergent Kamarov for his expertise in Western culture. During that time, Rodion developed a rapport with Yegor Novak from the Chimera unit.

Rodion appears in Call of Duty: Mobile and was added on September 20, 2021, during Season 7: Elite of the Elite as part of the "Secret Informant Crate".

Rodion operator intro. Note that the model here is different from his default operator skin. 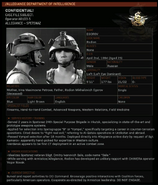