Call of Duty Wiki
Register
Don't have an account?
Sign In
Advertisement
in: Call of Duty: Modern Warfare Characters

AS VAL, and any weapon obtained by the player

"A Russian patriot whose love of country is only matched by his love of weaponry, Nikolai is a fixer who can acquire anything, anywhere. Despite his murky background, when it counts most, he’ll always choose right over wrong."
— In-game biography

"Nikolai" (Russian: «Николай») is the codename of a character featured in Call of Duty: Modern Warfare. Nikolai is the leader of the Chimera private military company. Nikolai was released as an Allegiance Operator with the Season Six of Modern Warfare and Call of Duty: Warzone.

Nikolai assisted Price and Garrick in capturing Jamal "The Butcher" Rahar and Nikolai provides them weapons for their unsanctioned operation. Price and Garrick chase after Rahar. As Rahar is getting away, Nikolai hits him with a black van and drags him into the van. Later, Nikolai kidnaps Rahar's wife and son for the interrogation. Nikolai has also displayed a hate for Roman Barkov on many occasions.

Nikolai takes part in the attack on Barkov's chemical factory, providing Alex, Farah and the team explosive charges for the demolition. After Barkov's death on a helicopter, Nikolai, who was also in the same helicopter tells Farah that "Mother Russia would approve."

Nikolai is one of the characters shown and heard in the Season 4 trailer for Warzone and Multiplayer.

Thanks to Price's intel, Nikolai and Farah are sent to the metro subway systems in Verdansk after discovering that Victor Zakhaev and his men have been moving and smuggling weapons using the subway discreetly, although the power was deactivated. As Nikolai worked on turning on the trains, Farah eliminated a group of Zakhaev's soldiers approaching Nikolai's position. After getting the power back online, Nikolai and Farah used one of the trains to make their way through Verdansk, notified Price and continue their search for Zakhaev. 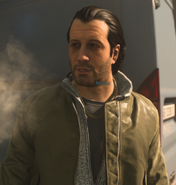 Nikolai and Farah in Into the Furnace.

Nikolai as an operator. 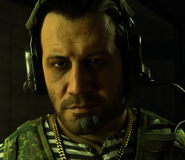 Farah and Nikolai in the Season Six intro cutscene.

Season Six Promotional image with Nikolai and Farah in Verdansk.

Nikolai together with all members of Task Force 141, after Victor Zakhaev death.