Senior Sergeant (in the Soviet Army)

For other characters, see Nikolai.
"Da - I know a place."
— Nikolai responding to Price at the end of Call of Duty: Modern Warfare 2.

Nikolai was a former Soviet Army Senior Sergeant from an anti-tank rifle unit.[2]

Nikolai was also a veteran of the Soviet-Afghan War.[3] He was also a pilot as it was mentioned in "The Enemy of My Enemy" in Modern Warfare 2.

In the events before the mission, "Blackout", Nikolai was detained by the Ultranationalists under suspicion of espionage. The SAS team under Captain Price must find and rescue him before he was executed. He was informing the British from the Ultranationalist camp until his cover was blown. He helped start the entire chain of events in Call of Duty 4: Modern Warfare and Call of Duty: Modern Warfare Remastered as it was he that supplied the intel for the cargo ship mission.

In "Hunted", the Black Hawk that was carrying the extracted team was shot down over hostile territory and he was forced to fight alongside the team with only the AK-74u that Price gave to him. Finally, under the cover of AC-130 fire, Nikolai was evacuated by a second helicopter to a safehouse in Hamburg and his last mention in the game was a loading cutscene which he sent the SAS the coordinates to Khaled Al-Asad's safe house in Azerbaijan.

Nikolai played a bigger role in Call of Duty: Modern Warfare 2 than in its precursor and he was quite adept at flying and driving multiple vehicles, though it was unknown how he acquired them. He appeared to be a mercenary pilot.

In "The Hornet's Nest", the stranded Task Force 141 team was left without a helicopter since the U.S. was barred from entering Brazilian airspace and the Russian invasion of the United States overwhelmed the civilian communications. Captain John "Soap" MacTavish called Nikolai to come rescue the team. Nikolai arrived in a Pave Low, but the heavy RPG fire made the landing zone "too hot" or dangerous. Soap ordered Nikolai to wave off as the team should be able to find a secondary extraction point. Sergeant Gary "Roach" Sanderson when running and keeping up with the Task Force fell from the rooftops, further delaying the exit. Roach quickly rushed throughout the favela by evading the enemy forces, reaching the rooftops and making it to the helicopter.

In "The Enemy of My Enemy", Nikolai extracted Price and Soap from the Boneyard under fire in a C-130 Hercules as Price and Soap drove their jeep into the cargo hold of the plane. Nikolai dropped Price and Soap off at Site Hotel Bravo in "Just Like Old Times," but despite having been told that it was a one-way flight, he returned to rescue the two in "Endgame" with a Little Bird. The last sentence that he said was, "Da. I know a place." The place that he was referring to was a safehouse in Himachal Pradesh, India.

Nikolai was almost always alongside Yuri and the disavowed Task Force 141, ready to help when needed. In the introduction of Call of Duty: Modern Warfare 3, he and Price carried an injured Soap to the helicopter with Yuri. He also provided remote air support during the mission to capture Waraabe in Somalia. His Hind was shot down during the extraction and he had to be rescued from the Somali Militia during a sandstorm. During a raid at Karlstejn Castle near Prague, Nikolai seemed to have deployed Yuri and Price and extracted them after informing Delta Force about Makarov's hunt for Alena Vorshevsky. Nikolai also provided support and recon for Price and Yuri as they made their way through the hotel on a mission to kill Makarov.

Nikolai when a Landing Zone was built would sometimes land his Pave Low at the player's base for repairs. He was referred to as the Engineer and as a token of gratitude would decrease the amount of time to upgrade a building. He was since replaced with supply drops and did not not appear back in the game since.

Before Call of Duty 4: Modern Warfare 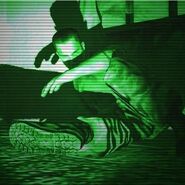 The menu picture for "Blackout".

Nikolai in the cutscene of "Persona Non Grata".

Soap's drawing of Nikolai on his journal. 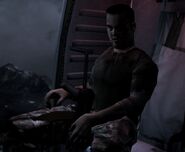 Nikolai in the helicopter at the end of "Blackout".