Strela-P, Holger-26, Any weapon obtained by the player

Nikto (Russian: Никто) is a Spetsnaz operator of the Allegiance faction featured in Call of Duty: Modern Warfare and Call of Duty: Warzone. Nikto was released during Season One of Modern Warfare on December 18th, 2019 as part of the "Nikto Operator Bundle" inside the in-game store.

Nikto appears as Andre Nikto in Call of Duty: Mobile and was added on May 15, 2020, during Season 6 Once Upon A Time In Rust as part of Void Draw. [1]

Nikto pilots a helicopter to help Templar exfiltrate. However, after Templar is betrayed by Ghost, other soldiers approach Nikto's helicopter and shoot it. Nikto later took several hostages forcing the Task Force 141 to intervene.

Nikto as he appears in Season One promotional material.

Nikto on the banner of Nikto Operator Bundle.

Nikto as seen on the bundle art Nikto Firestarter Bundle.

Nikto as seen in the Season 6 Once Upon A Time In Rust trailer. 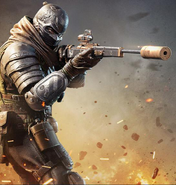 Nikto with Dark Side uniform.

Nikto in a F-85B Bullshark.