Currently led by Ethiopia, the NRC is a political-economic, supranational union that seeks to control the flow of the Nile River as water has become a strategic and invaluable resource in a world suffering from the effects of global warming.[1]

The Nile River Coalition was founded in 2022 by South Sudan and Ethiopia. It initially served as a trading alliance between the two countries, until Sudan joined in 2024. As global warming continued throughout the late 2020s, the NRC implemented tariffs on water trading in order to assist each other with increasing water shortages. In 2030, the Kampala Agreement saw the absorption of Uganda and Kenya into the NRC.

In the 2030s, the NRC developed plans to build a series of dams and water treatment plants along parts of the Nile River that passed through its territory. Although it did not have the funding to bring these plans to fruition, the idea drew controversy and condemnation from Egypt and the Winslow Accord, which claimed it was a breach of the Helsinki Rules.

In 2039, Kenya discovered substantial amounts of rare-earth elements, particularly niobium and neodymium, which it began to trade with the Common Defense Pact; it is estimated that Kenya will overtake the US in production of rare-earth elements before 2075. In exchange, Kenya was admitted into the CDP, and the rest of the NRC's member nations followed suit by 2040. The strengthening relationship with the CDP ensured that the NRC received the funding and expertise it needed to materialise its plans to build dams on the Nile River.

By 2053, Kenya had constructed dams and water purification facilities on the Nile River; Sudan and South Sudan completed theirs in 2055, followed by Ethiopia in 2059. The water flow from the Nile River into Egypt significantly dropped and, facing severe drought and civil unrest, the Egyptian government declared war on the Nile River Coalition with the intent of destroying the NRC's dams. The war would rage on for over five years, fuelled by indirect involvement from both the Winslow Accord and the Common Defense Pact.

While Egypt would initially seize the advantage during the war, the Egyptians had underestimated the NRC's military strength, as the NRC's CDP membership ensured its military was a modernised, well-armed and well-trained fighting force. By 2063 the parched Egyptian army had retreated from NRC territory, swiftly followed by the coalition launching its own invasion of Egypt. Much of Egypt would be conquered by NRC forces and its capital, Cairo, would find itself under a protracted siege.

In 2064, Uganda finally completed all of its work on water processing facilities. The flow of the Nile through Cairo was down to just 10% of its 2014 level.

With its newfound economic power and international influence, the NRC created one of the world's largest and most advanced combined military forces. Because of the DEAD Systems limiting the ability of air attacks on foreign countries, the NRC focused on the ground components of its Army. Its hundreds of thousands of soldiers (co-ed and multiethnic) were outfitted with high-tech weapons and armour; the NRC's membership of the CDP proved useful here, as CDP-supplied equipment was a significant step up from the NRC's previous equipment. The NRC's trade of rare earth elements with the CDP also enabled it to purchase many combat robots from the geopolitical block to complement its increasingly unstoppable human army. Despite the DEADS, the NRC had a substantial air force which heavily utilized VTOLS, transport aircraft, unmanned drones and F-85B Bullsharks, as well as an experimental mothership.

The NRC's military seemed to be highly integrated - soldiers utilised common equipment and all military insignia utilised the symbols of the NRC itself, rather than that of its member states, with no indication of either enlisted men or officers being distinguished by nationality.

The NRC's military was extremely brutal in nature. They thought very little of collateral damage against civilians, utilizing overwhelming force to take cities, destroying infrastructure, landmarks, and oppressing the population. Military prisoners of the NRC could expect to be tortured, not for information, but rather as punishment for opposing the NRC. More unsettling, the NRC's technicians programmed their Grunt robots to viciously and methodically assault enemies. When given the opportunity, NRC Grunts were known to capture enemy human soldiers and brutally dismember them before killing them to create an element of fear among opponents.

The Nile River Coalition was closely allied with the Common Defense Pact. They traded rare earth elements to the CDP in exchange for advanced military equipment. The CDP also helped the NRC construct dams along the Nile River to increase water storage and electrical capacity. The CDP was also supportive of the NRC's war against Egypt to destablize Winslow Accord strategy in the Middle East and Africa. The NRC was also allied with the 54 Immortals, appreciating their shared brutality and sending special forces to assist in counter-intelligence operations against the WA. The CDP smuggled most of the NRC's equipment through destroyed Singapore. 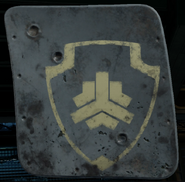 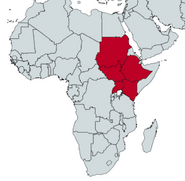 A map of the Nile River Coalition.