"Bad news. We still don't have the abort codes. Just get to the control room and hope the Russians come through with the abort codes before the missiles impact their targets and start World War 3."
— Call of Duty: Modern Warfare Remastered level description

"Captain Price, we're sending your team the abort codes you'll need to auto-destruct the missiles in flight. You have fifteen/eleven/nine minutes before those missiles reach the eastern seaboard, over."
— Command to Captain Price (the time changes depending on difficulty)

"No Fighting In The War Room" is the nineteenth and penultimate campaign mission of Call of Duty 4: Modern Warfare and Call of Duty: Modern Warfare Remastered, in which SAS/U.S. Marine MARSOC Forces infiltrate a missile control silo taken over by Russian Ultranationalists in order to reach the control room and upload the abort codes to stop the nuclear ICBMs from reaching the Eastern Seaboard of the United States. It is also the penultimate mission of Act 3.

Captain Price and the team crawl through the vents as the marine forces engage the enemies from below and provide security overwatch and then drop down to infiltrate the mission control silo. They fight their way through, shooting the many, many enemies that are defending the main control room. The team has to work fast, lest they risk being killed by another missile, of which the fire would burn the entirety of the place. Once they reach a secure room, they move on to a large blast door which Gaz opens.

Once through, they wipe out the remaining enemy troops and blow a hole through the wall with C4 giving the team access to the main control room, where Soap types in the abort codes. Once they have saved the 41,096,749 people, they see Imran Zakhaev leaving in a helicopter. The team briskly leaves, ready to make their getaway.

The player will start the level in the air vents. Follow Sgt. Griggs and Capt. Price until dropping down. Follow the team into a few rooms with guards in them. There will be a large number of guards in one room. The player can run forward in the room where they pour out, or fight them then move on. Follow the team until reaching a room with lots of boxes. The player will then have to go to one of the mini-silo's. Be utmost careful, since in all doorways an enemy will come out. Follow it until Captain Price says "Go, Go, Go!" Then PA counting down from 10 in Russian language while the player should reach a room with a huge metal door. Gaz will say something for the first time. The door will open. Eliminate all targets until the "all clear" signal is given. In the wall to the right will be a basement. Go to the end of the brick wall and plant the C4 on the wall. Stand clear then blow it up. Breach into the Intercontinental ballistic missile (ICBM) control room. Once clear, someone will say "Tango Down" then type the codes. Wait. Then Gaz will say he's taking heavy fire at the vehicle depot. Follow Price to the elevator lift (there will be some reinforcement guards too). Then help them in the vehicle depot. The player will exit there.

Depending on the difficulty being played, the player has different amounts of time to disarm the missiles:

After Command announces that the player has a certain amount of time to upload the abort codes, the timer begins. There are only five checkpoints in all difficulties and they must be reached before a certain time, or else the game will not save.

For Veteran, the first checkpoint is at the bottom of the staircase leading to the lower level. The player must get here by 7:00 or sooner. The second checkpoint is at the end of the large room full of boxes - if the player reaches the end where it is darkly-lit with red light by 6:30, the game will save. The third checkpoint is reached at the end of the forked straightaway (where the player enters the missile silos) and must be reached by no later than 5:30. The fourth checkpoint is activated if the timer is at no less than 2:30 after the silo doors have opened. The wall that the player must breach with the C4 has to be reached with at least 1:00 remaining on the clock. If the player does not reach these checkpoints quickly enough, they will still be allowed to continue. But if they die or run out of time, then they will be sent back to the previous checkpoint they reached. 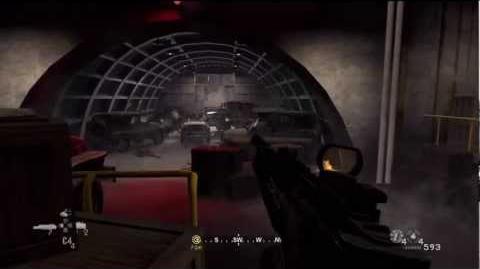 Call of Duty 4 Modern Warfare - Campaign - No Fighting in the War Room
Original. 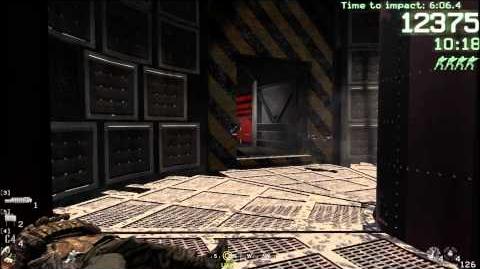 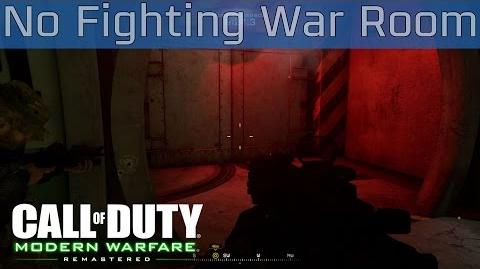 Main article: No Fighting In The War Room/Transcript

Fighting in the nuke launch pads. 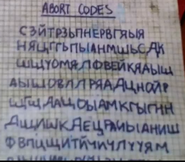 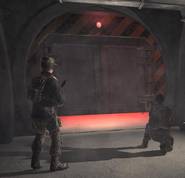 Price and Griggs wait for a door to open. 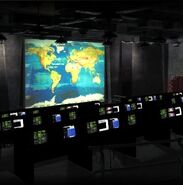