Gather intel on Federation activity in the area.
Meet up with recon team.
Reach Firebase Charlie.

"Meet with a recon team outside the wall."
— Mission Description

"No Man's Land" is the third campaign mission in Call of Duty: Ghosts. David "Hesh" Walker, Logan and Riley must recon their way through a demilitarized zone spanning from Los Angeles south to San Diego, being fought for between Ghosts and the Federation in their ongoing war. It is a stealth/reconnaissance mission, in which the player must take out enemy soldiers silently.

David "Hesh" Walker, his brother Logan, and their German shepherd Riley are sent to No Man's Land to investigate Federation activity in the area and regroup with a recon team. After taking out a small enemy patrol, they move through the remains of their old house, which had become destroyed and overgrown. As they move out of their former home they gaze in depression at the massive crater that had once been their town. They then push onward with the mission. As they approach a small neighborhood, a tremor causes what's left of a church to collapse into the crater. Riley whimpers, but Hesh calms him down. The three later spot an enemy patrol in front of a house. Logan syncs up with Riley who takes them down silently within the grass. After sneaking past a large patrol, the three discover a brainwashed American and the field commander of the Federation forces named Rorke is holding a soldier named Alex V. "Ajax" Johnson hostage. Then, Rorke tells the Federation soldiers to move everything and Ajax to "Firebase Charlie" and "Operation Homecoming" will proceed on schedule. The three leave the patrol without being seen, but encounter wolves. Riley saves Logan from a wolf attempting to bite his face off, but gets himself in a scuffle with the wolf. Logan saves Riley by shooting the wolf with his P226. As the other wolves charge for another attack, the wolves become ambushed by Captain Thomas A. Merrick and Sergeant Keegan P. Russ of the legendary Ghosts and retreat. Merrick and Keegan reveal they were sent to No Man's Land to rescue Ajax, and that they were the recon team Hesh and Logan were planning to regroup with. Hesh and Logan then join the Ghosts, and clear remaining forces in the area. Then, they push on to Greenway Park Stadium, where Ajax is being held hostage. 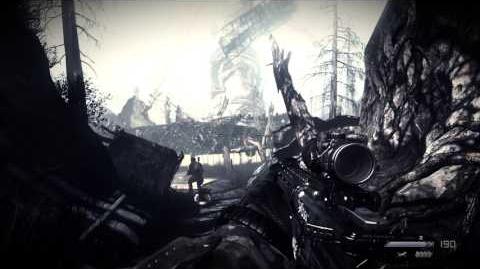