FSB/Zakhaev Airport Security (all the civilians are optional targets) 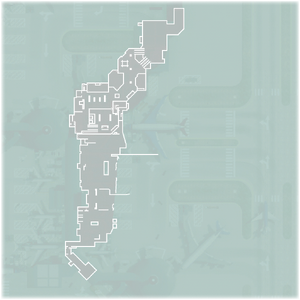 "No Russian" is the fourth mission of Call of Duty: Modern Warfare 2. The mission takes place in Zakhaev International Airport. The controversial mission sees the player take part in a massacre of hundreds of civilians in a false flag operation, which plays a major role in starting World War III. It also appears in a flashback during Call of Duty: Modern Warfare 3, when player-character Yuri tries to stop Makarov.

The player, as Joseph Allen, under the alias "Alexei Borodin", starts out in an elevator with Vladimir Makarov and three other gunmen in Zakhaev International Airport.

When the elevator opens, they slowly walk out into an airport security checkpoint where all of the gunmen open fire on the civilians, although the player may abstain. The player's movement speed is restricted to a casual walk through the airport. The gunmen move through the airport, and at certain points the player's speed is allowed up to a slow jog (using the sprint button). This movement speed restriction is removed once the player exits the airport terminal.

After exiting via a gate service area the gunmen encounter FSB troops. For the first half of the level, the player utilizes the M240 and the M4A1 with M203 to cause as much destruction as possible (UMP45s, TMPs, F2000s, MP5Ks, Riot shields and M9s can be picked up as well).

The only threat in this part of the mission are the police officers, though the terrorists will kill them easily regardless of any action on the part of the player. Halfway through the level, several Russian FSB teams arrive on the tarmac in armored trucks. The M203 can be used to make short work of any Riot Shield users. Flanking them or throwing flashbangs at them are also effective tactics, but they will often focus on the other gunmen. During this battle Lev and Kiril are killed either by the F.S.B squads or by Allen.

After killing all FSB troops in their way, only Allen, Makarov, and Viktor remain alive. Makarov leads Allen and Viktor to an ambulance (the getaway vehicle). Anatoly opens the doors and is not surprised to see only three men alive.

Regardless of whether the player holds his position or boards the vehicle, Makarov executes Allen, leaving his body to be found by the Russian government. The combination of NATO weapons and equipment, English-speaking shooters who use military terminology and the body of an American soldier, makes the attack appear to have been supported by the U.S. Government, just as Makarov intended.

This level has been cited as one of the most controversial levels in video game history, due to its depiction of acts of terrorism and mass murder carried out by the player. Although many earlier games such as Grand Theft Auto have allowed the shooting and killing of civilians without penalty, Modern Warfare 2 is the first game to put the player in control of a gunman during such a civilian-dense terrorist attack.

However, there is an option to skip the mission entirely, found at the beginning of the game and the beginning of the mission itself (labeled as Disturbing Content). Also, if a player wishes to play the mission but would like to skip it at any point, there is an option at the pause screen that allows the mission to be skipped at any time the player likes. There are no penalizations in terms of achievements/trophies or game completion. It should also be noted that there is no on-screen prompt or incentive given to the player to shoot/kill civilians, as the mission's only objective simply says "Follow Makarov's lead". Additionally, the player can go through the mission without shooting any civilians or police officers.

In the Russian version of the game by 1C Company, this mission is not available for play. In Japan and Germany, if the player kills a civilian, the game will restart from the last checkpoint with a message saying "You killed a civilian!". In the Japanese version, Makarov's line, "Remember, no Russian" is mistranslated as "Kill them, they are Russians." This was criticized as the plot of the game was centered around the terrorist's motivations and as a result, the mistake caused some confusion.

During the flashback to "No Russian" in "Blood Brothers", Yuri, Makarov's right hand man, attempts to stop Makarov from killing the civilians, but Makarov finds out about Yuri's betrayal. Lev and Kiril hold down Yuri as Makarov comes out of the shadows, shoots him, and leaves him for dead in the parking garage. A severely wounded Yuri crawls in to the elevator. Makarov is heard saying his infamous line "Remember, no Russian." Yuri exits the elevator and picks up a dead guard's P99 in attempting to stop Makarov and the others, but falls over and loses consciousness due to severe blood loss. A medic finds Yuri and begins to save him as the flashback ends.

In the airport elevator where Makarov reminds the team not to speak Russian.

Makarov and his team, ready to initiate their attack.

The exterior of Zakhaev International Airport, as seen in the multiplayer map Terminal.

Makarov, Lev, and Viktor as they attack the airport.

Makarov escaping after the massacre.
Add a photo to this gallery

Retrieved from "https://callofduty.fandom.com/wiki/No_Russian?oldid=2473926"
Community content is available under CC-BY-SA unless otherwise noted.