The Conqueror
Father of the Frost Giants

General[2] Norticus, also known as Norticus the Conqueror, is a character featured in Call of Duty: Vanguard Zombies mode. He is a deity of the Dark Aether. He was first mentioned in Call of Duty: Black Ops Cold War by Sparagmos in intel for the map Forsaken.

Norticus the Conqeuror is one of the many Elder Gods residing in the Dark Aether. He was the highly competent and revered Supreme Commander of the Night Legions, so much so that enemies would throw down their weapons and beg for mercy upon the mention of his name. This led him to be recruited by Kortifex the Deathless to lead his armies, with whom he waged the Netherwars in a bid to conquer the Dark Aether. However, a resistance soon formed against Kortifex, and Norticus realized that he was on the losing side. Thus, Norticus became a turncoat, joining the likes of Saraxis the Shadow, Bellekar the Warlock and Inviktor the Destroyer. Norticus, along with the four aforementioned deities, would become trapped in various artifacts that made their way into the "realm of mortals". Norticus himself would become trapped in the Horn of Norticus.

These artifacts would be discovered by Wolfram Von List and Die Wahrheit, remaining dormant in their possession. However, the breaching of the Dimensional Membrane at Poland by Projekt Endstation activated the artifacts. Kortifex, through his own artifact, would bond with Von List and allow him to command an army of the dead. The artifacts of the revolting gods would make their way into the ownership of Allied operatives deployed to Stalingrad, bonding with those who wielded them. The Horn of Norticus in specific utilized the power of Frost Blast.

"Ripped from the chest of a Tormented Soul, the Crystal Heart burns with such vigor it could power the cannons of Norticus. Be wary, for its fire must remain lit for its potency to be assured."
— Sparagmos

After the appearance of the Forsaken in the Dark Aether, he soon vied for power against the Old Ones, who ruled the Dark Aether at that point. While it is currently unknown whether or not Norticus held any role during this power struggle, he was remembered by the Zealot Sparagmos while crafting the Chrysalax, stating that the heart of a Tormented One burned with such vigor that it could power the Cannons of Norticus.

"I had no mercy. Just a string of victories that stretched back to the dawn of time. And now? Now I am shackled to a pathetic bag of blood whose lifespan is as brief as it is meaningless. Oh, how I have fallen."
— Norticus

Norticus is a highly competent strategist and general, something in which he takes great pride in. He holds a great hatred towards his former master Kortifex, as he viewed him as overly cruel and without loyalty. He also despises being trapped in an artifact, as well as being forced to work with humanity, which he views as a "brief and meaningless" species. Regardless, he begrudgingly works with humanity to stop Kortifex with the hopes that they might be able to return him to the Dark Aether. 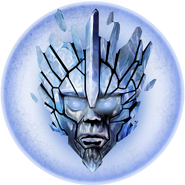 Norticus, as seen on the Frost Blast icon.