"The Cold War heats up, as superpowers collide at the brink of thermonuclear meltdown in this covert Russian nuclear launch site disguised as a quiet Russian village."
— Map Description

Nuketown (stylized as Иuk3toши) is a multiplayer map featured in Call of Duty: Black Ops 4. It was released for free on November 13th, 2018 for PlayStation 4, and November 20th, 2018 for Xbox One and PC. Nuketown is also available in Call of Duty: Mobile where it is called Nuketown Russia and was added on December 28, 2020 as part of the Season 13 Wint3r War update. [1]

Being a remake of Nuketown from Call of Duty: Black Ops, the map's layout is nearly identical, although this iteration of Nuketown is now set at a Russian nuclear missile testing site during the Cold War. The map is now covered in snow, and the buildings now have Russian inspired architecture. The RC-XD passage is present in this map and brings the players underground to the missile silo, where a warhead can be seen ready to launch. At the end of a game the silo doors will open in the center of the map, causing the warhead to launch and sending a jeep flying off the ground.

Similar to Nuk3town, the center train that players can traverse though has an open door, blocking a long range line of sight from the B flag portion of the map previously found in older iterations. 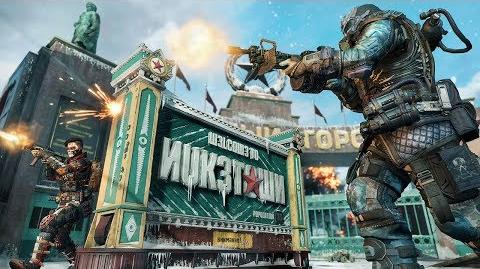