Survive endless waves of the Undead

"Nuketown Zombies is set during the events of Moon, and after the end of the multiplayer level from the original Black Ops game. A group of radiation scientists are investigating the Nuketown remains and discover soldiers that have been revived by Element 115 from a nearby Nevada base. The zombie soldiers attack the radiation scientists and turn them, and after receiving a distress signal, the base in Nevada sends in CIA and CDC agents to investigate. Upon arrival in Nuketown the agents lose communication with Hangar 18 and become stranded…setting the stage for Nuketown Zombies."
— Season Pass map description

The map's main playable factions are the CIA and CDC.

The map's events are set following the nuclear explosion after a multiplayer game ends on the multiplayer map from Call of Duty: Black Ops, Nuketown, with buildings and other environments demolished as well as the nuclear fireball of a "mushroom" cloud seen outside the map.

This map also occurs simultaneously with the events of Moon, as zombies have yellow eyes to begin with, but eventually change to blue to signify Richtofen's control of them; additionally, Samantha's voice can be heard at first when collecting power-ups, but over time, Richtofen's is heard instead. As players finish rounds, they can hear Richtofen's progress throughout the events of Richtofen's Grand Scheme, or the Big Bang Theory from Call of Duty: Black Ops.

The map was previously only available to players who purchased the Hardened, Care Package, or Digital Deluxe editions. From December 2012, players who have acquired the Season Pass can download the Nuketown Zombies map for free. However, as of March 13, 2013, it is available on the Xbox Marketplace for 400 Microsoft Points. It was released on Steam and The PlayStation Store on April 12 for $5.00.

Taking place in 2025 after a Broken Arrow drill used for mining Element 115 causes a nuclear explosion in the Nuketown test site, players will spawn in the center of the map as CIA operatives or CDC agents. Debris and rocks block paths, making navigating and maneuvering harder throughout the map. Perk-a-Colas and the Pack-a-Punch Machine will spawn randomly across the map when a nuclear alarm has sounded.

Just like prior Zombies maps, the player can buy an M14 and an Olympia on the back of the bus and the front of the truck, in front of wooden boards, respectively. The doors to both the yellow house and the green house are locked, which require 750 points each to unlock. There is a chunk of debris blocking access to the inside of the truck, which costs 3000 points. Inside, the player(s) can find a Bowie Knife, Semtex Grenades, Claymores, an AK74u, and Galvaknuckles hidden behind some boxes. There is a Mystery Box spot under the overhang of the yellow house's garage. The player(s) can also crawl through the gap in the green house's garage, leading to an empty room where zombies can come from the ceiling, the hole leading into the house and from under the garage door.

Inside the yellow house, the player(s) can find the Remington 870 MCS above the fireplace for 1500 points, with the debris to the upstairs and the door(s) outside costing 1000 points. Upstairs, in the middle of the two windows, one can buy the Colt M16A1 for 1200 points. There are gaps in the porch leading to the backyard, allowing the player(s) or the zombies to drop down into the backyard. There is also debris blocking the stairs from the backyard to the second floor, costing 1250 points. In the backyard, there is one Mystery Box spot, outside of the garden patch. There is also a door that costs 3000 points to unlock, that leads to a random power-up drop.

Inside the green house, the player(s) can find the B23R next to the TV, which costs 1000 points. Like the yellow house, there is a closed door and a cluster of debris costing 1000 points each leading to the outside and the second floor, respectively. The MP5 is located in the bedroom upstairs, which costs 1000 points. Again, there are gaps in the porch leading to the backyard, letting the player(s) drop to the backyard, with the debris on the stairs costing 1250 points to remove. The backyard has two Mystery Box locations, one is next to the left of the fallout shelter, and the other is on the side of the ruins of the doghouse.

The Nuketown population sign number will show the player how many zombies they have killed. If the player kills a zombie once, the counter goes to 99, it will then reset to 00, the white hand on the clock nearby will then tick, which will cause a timer to go off.

Nuketown Zombies contains no boardable windows in which the zombies can breach through, therefore the Carpenter power-up has been removed.

Due to the fact this map takes place chronologically as the same time as Moon, Edward Richtofen switches places in the M.P.D. with Samantha Maxis at Round 25, and acts as the Demonic Announcer for the rest of the game.

A full overhead map can be viewed below:

Just like any zombies map, Nuketown contains an array of hidden Easter Eggs relevant to the Zombies storyline;

The backyard of the yellow house

The backyard of the green house

Center area of the map

The mushroom cloud left from the original nuke explosion

The crater of the nuke

The shed holding a power-up

Juggernog crash landing into the map

Concept art for Nuketown Zombies, while it was called "Nuke'dTown Zombies!". 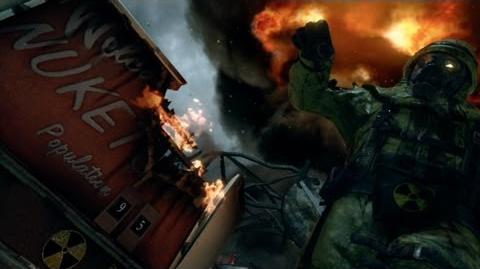 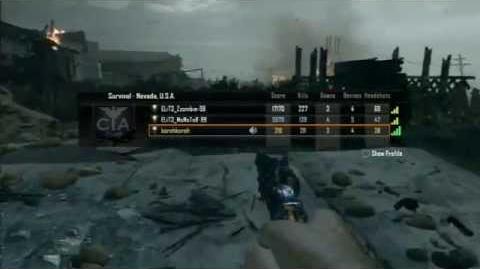