Call of Duty Wiki
Register
Don't have an account?
Sign In
Advertisement
in: Call of Duty: Ghosts Locations

For other uses, see Odin (disambiguation).

The ODIN (Orbital Defense Initiative) Space Station is an orbital kinetic bombardment weapons platform developed by the United States that appears in Call of Duty: Ghosts. It also makes a brief appearance in Call of Duty: Infinite Warfare.

The station is armed with a battery of sophisticated kinetic projecticle launchers that can launch tungsten rods with pinpoint precision anywhere around the world. The tungsten rods were 6.1 by 0.3m and had the equivalent of a small tactical nuclear warhead, but without the fear of nuclear fallout, reaching speeds at about Mach 10 and reaching its target in minutes. The weapons platform is constantly manned by crews rotating every three months to avoid muscle atrophy, skeletal deterioration, and to maintain combat readiness should ODIN ever be needed.

On July 10th, 2017, as the crew was completing a systems test of the weapons platform, the Daedalus shuttle arrived to rotate the crews back to Earth. As Specialists Kyra Mosley and Baker return to the station, a squad of Federation soldiers emerge from the shuttle and kill the crew. The Federation took control of the station and began targeting American cities and firing the tungsten rods. The first payload targets Los Angeles, San Diego, Phoenix, Houston, and Miami with an estimated 27 million casualties. NASA scuttles the ODIN Space Station and activates the station's self-destruct system. This aborted the launch of ODIN's third and fourth payloads, presumably saving dozens of cities. However, the second payload of rods had already targeted San Francisco, Denver, Kansas City, Chicago, and Washington D.C. and were preparing to launch. Accepting their fate, Mosley and Baker destablize its orbit as it falls back to Earth, sacrificing themselves in the process as they burn up re-entering the atmosphere.

The resulting impacts from the rods devastated several regions across the United States, notably Southern California, Texas, New Mexico, Arizona, Southern Nevada, Louisiana, and Florida. The resulting wasteland of craters and destroyed cities along the southern United States became collectively known as "No Man's Land". The ODIN Strikes became the immediate catalyst for the Federation War as they invaded the United States. By 2027, when the Federation War had come to a stalemate, the Federation salvaged the surviving components of the ODIN Space Station from No Man's Land. Later, the Federation built a new orbital kinetic bombardment weapon platform, called LOKI, based on salvaged components of the ODIN Space Station.

Tungsten rods appear in Multiplayer as the K.E.M. Strike, which can be obtained through a Field Order or through a 25 gunstreak (24 with Hardline), similar to the M.O.A.B from Modern Warfare 3. The K.E.M. Strike kills every enemy player on the map, emits a Ground Jammer that lasts for 45 seconds, and can change the layout and terrain of the map in the case of Strikezone.

Odin appears in the Support Strike Package in multiplayer as a 16 pointstreak. It can drop smoke grenades and Care Packages that contain random Support pointstreaks. Odin can also drop an AI Juggernaut Recon that can be directed where to go.

The station on the cover of Popular Science

The tungsten rods strike the earth after the ODIN station has been hacked. 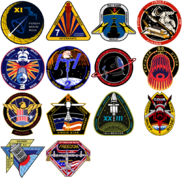 Note that ODIN's mission patch indicates it launched in 2016 and has the nickname of "the Death Blossom".