Oasis is a multiplayer map featured in Call of Duty: Modern Warfare 3 that was released as part of the Content Collection 2 DLC Pack. It takes place in an upscale desert hotel in Dubai and features the new ability to go underwater, similar to Getaway.

Oasis is also available in Call of Duty Online, where it is different from Modern Warfare 3, as the map is not set in Dubai and has a different map layout.

Oasis also returns in Call of Duty: Mobile and was added on April 17, 2021 as part of the Season 3: Tokyo Escape update. [1] The version of Mobile is the same of Call of Duty Online.

In Survival Mode, the player(s) start with a Model 1887, a Five Seven, a Self Revive, 250 Armor and Extreme Conditioning, but no Grenades or Flashbangs. The hostiles include Bomb Squads, Suicide Bombers, Little Birds, and Juggernauts. 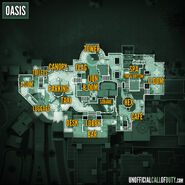 "Lose yourself in the Infinity Pool Ward"